12-Player Game of Age of Mythology 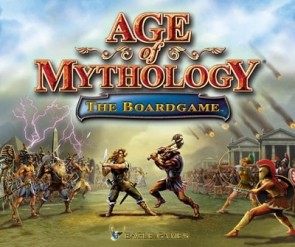 So I walk into the Strategy Gaming session that my buddy Tim runs with the local middle and high schoolers.  Usually I'm in the mix for the entire day but I've been catching up on about a hundred jobs around the house and yard and needed to let my son make the trip on his own this time.  But I finished up at home around 3 and headed
over early, only to find twelve kids all in on one big-ass game of Age of Empires!  He had put four tables together in a big rectangle and had two copies of the game fully used in one single game.  I just walked in and smiled and shook my head.

Tim walked over to shake my hand as he always does, and he asked me why I was smiling and I had to just tell him straight.  "Tim, nobody else does this.  Nobody else even considers putting twelve boys between the ages of 11 and 17 into one single game.  First of all because . . . they're sane, and second of all, because they can't pull it off.  You don't only do it, but you do it successfully.  Every kid here is enjoying the game and playing to win."  I admit that there were plenty of game boxes open on the table between turns and the Ravens were playing their season opener at the time drawing plenty of attention.  But when each kid's turn came up he was ready to go, his card selected and his pieces in neat little piles ready to deploy.  There were two separate side-tables used for battles and they were busy much of the time.

Tim admitted he had been caught off-guard, expecting a light crowd give the Sunday date this time and the Raven's opener.  But Age of Empires along with a few other B-A-As ("Big-Ass-Ameritrash) always pulls them in, along with History of the World and Civilization which are coming up later this month and in October.  But in spite of having twelve he simply did what he always does, makes room for another, adjusts rules to accommodate, and gets the ball rolling.  What impresses me the most is that he almost never raises his voice.  He doesn't need to.  He has the kids in the game each session, always getting big thank-yous from the parents.

One of the 11 year olds is going to be away on History of the World day and he's pissed.  He asked his parents if he could stay with a neighbor.