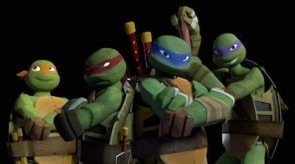 I am a fan of heroic action and adventure. I love pulp heroes and heroins. I cheer when good triumphs over evil. I cry at noble sacrifice and I'm not ashamed to live out my secret fantasies of saving the world vicariously though the stories of fictional characters. Tarzan, Conan, Robin Hood, Sam Spade; the list could go on and on but to it I must attach The Teenage Mutant Ninja Turtles.

"You mean that cheesy cartoon from the 80's?" you ask.

No, the animated show that premiered on Nickelodeon in 2012. That's what I mean.

I was flipping through the channels one day when it was on and I thought I'd watch a few minutes of it. 23 minutes later I sat with jaw agape and wondering when the next episode would be on. Lucky for me it was a back to back schedule so I got to watch another one right away.

It is so damn good...so unexpectedly good...that I was blown away.

The show really seems to have been created and written by people who were fans of The Turtles and it strikes a very well crafted balance between the somewhat grim tone of the original comics and the rather corny and goofy tone of the 80's cartoon.

There are moments of silly comedy but also some pretty intense violence. The Turtles come equipped with some outlandish gadgets like The Shell Raiser urban assault subway car but the city environments are dirty and gritty with graffiti and trash everywhere. And every now and then, if you're careful, you'll catch a very brief visual which could have been lifted straight out of the old comics; a pose, a city scape, it's very cool.

All of that is well and good but it wouldn't count for much if the story and characters weren't developed. But they are! This isn't an aimless collection of episodes with a "monster of the week" to fight, although there is some of that. No, it's a story arc that builds up all season with bits and pieces of the mystery and motivations of the enemies slowly developing over many shows and coming to an action filled and very very tense season finale.

All the characters in the show are drawn with depth and it really allows you to care for them by the end of the season. It goes beyond the monochrome defining trait associated with each turtle. None of them are perfect, they don't always do the right thing, and they don't always win the fight.

I think it's this last aspect, the fact that the turtles can be and often are defeated, that elevates the writing above common animated fair. You never know what the end result will be or if they will win.

There have been some changes made to some of the characters. April O'Neil is not a reporter but a high school student. Splinter is actually a mutated Hamato Yoshi rather than Yoshi's pet rat. The Krang are a race of space brains from Dimension X rather than a singular character. Each turtle having a distinct physical appearance rather than being identical other than the color of head band. But, unless you a true zealot of the purity of the original comic, you won't notice for long or care.

The show, while filled with violence, is quite suited for children above 6 or 7. The turtles chop up a lot of robots and occasional slice and dice a severely mutated monster. But they are not shown killing people. The themes of brotherhood, duty, honor, love, and loyalty are all admirable.

There are many memorable moments but a few stick out for me. For example, Leo has grown tired of his brothers questioning his leadership and lets Raph lead the team while he stays back in the lair when Splinter comes to ask him why he has abandoned his role as leader....

Leonardo: Why not, Sensei? I've had to make every other decision and I'm tired of it! Those guys have no idea what kind of pressure I'm under and all they do is complain. Is it too much to ask for a simple "Thank you."?
Splinter: (Bangs his staff in scolding disappointment) Of course it is! Leadership is not about being appreciated, it is about responsibility. It doesn't matter that the burden is heavy, It matters that you carry it. Now go find your brothers!

That scene gave me chills and if a cartoon can do that you know it's good.

Where can you see it? I used my DVR to record episodes as they aired on Nickelodeon. It doesn't appear to be available on Netflix but you can "rent" the season from Amazon for $15 or so. I think it's worth it.