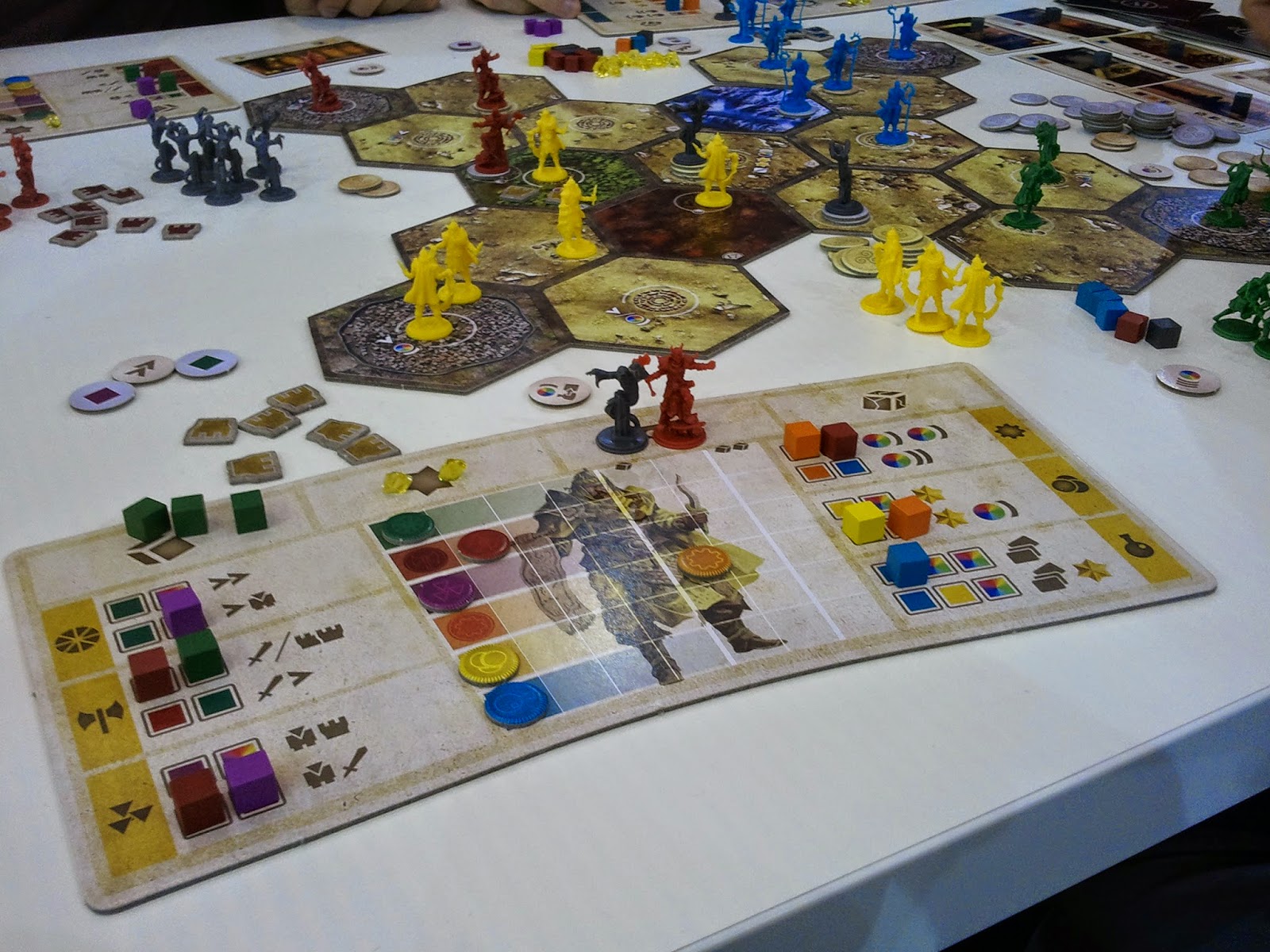 Hyperborea was a great start to the show. It allows for different strategies, offers some interesting events and sets up for conflict. It’s rightly been likened to Eclipse. We went through a few rounds and then decided it was a winner. 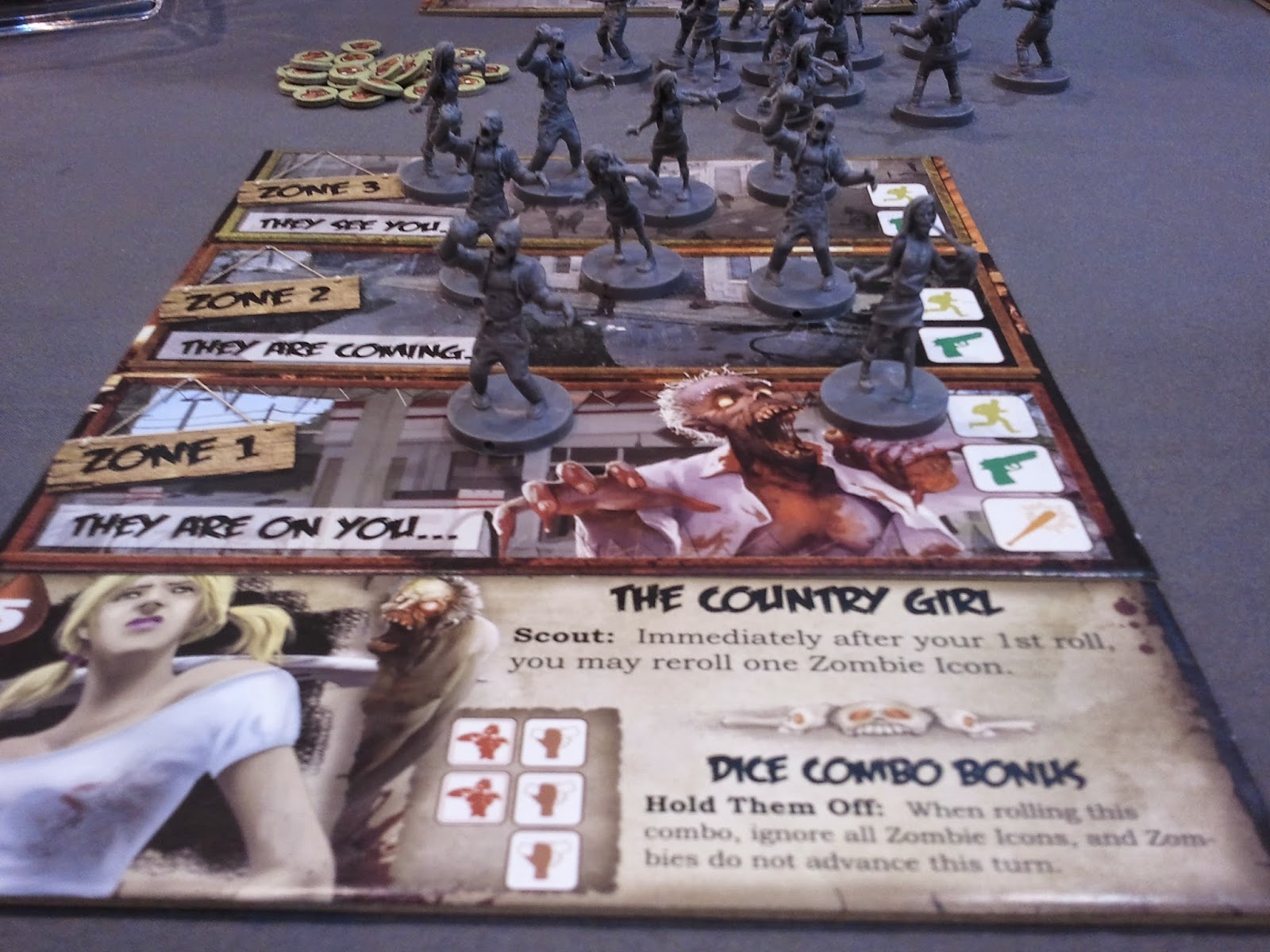 Run, Fight or Die is the umptiest zombie game and I realized I was suffering from zombie fatigue after a decade of exposure. And although there is some kind of a challenge in there, it is mostly multiplayer solo. 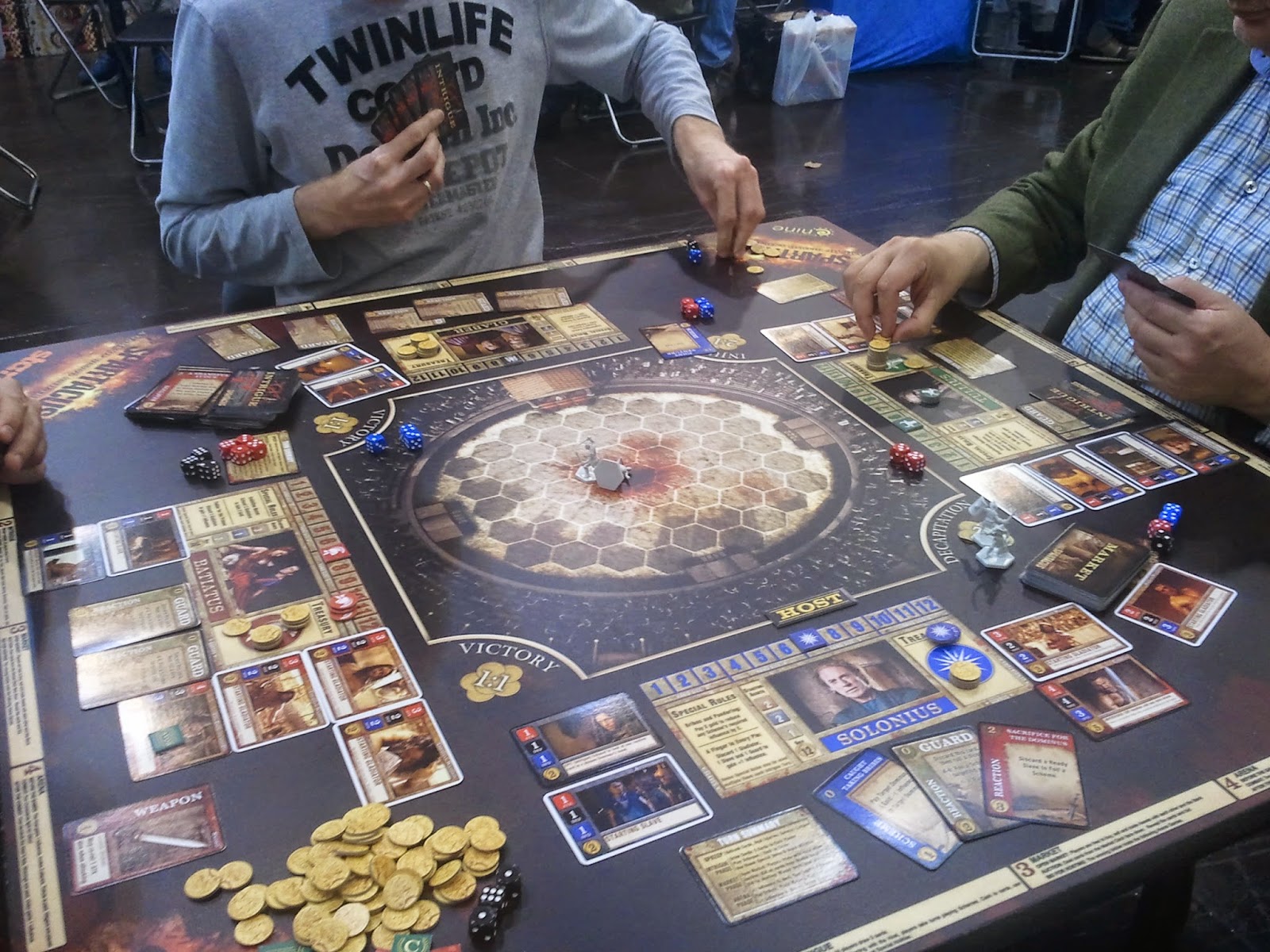 Spartacus is one of the first games by Gale Force Nine and although it probably isn’t the edgiest design, the intrigue is fun. Trash talk flows naturally and you find yourself booing gladiators that don’t try hard enough. 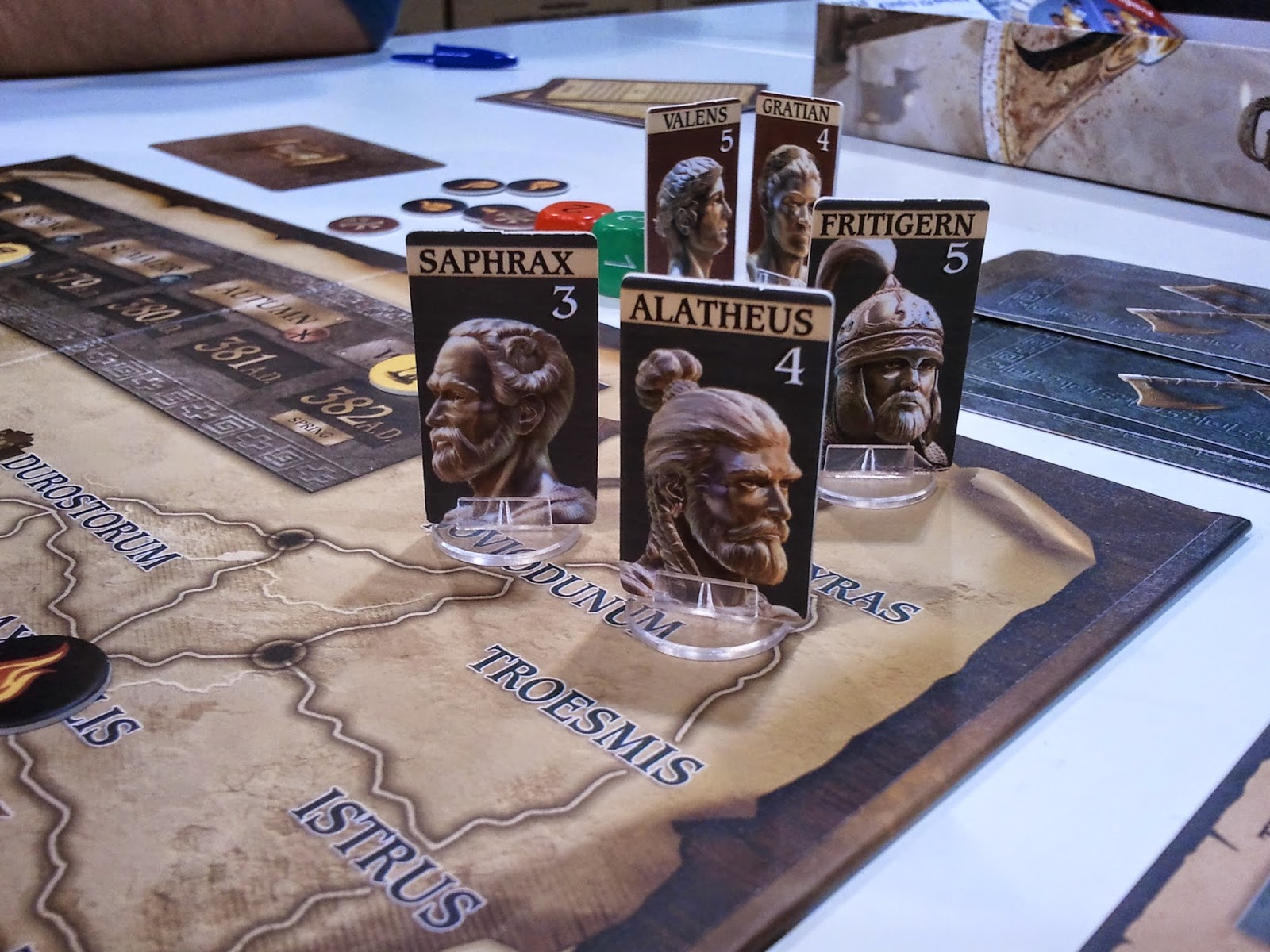 Theme and the fact that it is published by a Greek company drew me to Gothic Invasion. How can you not get excited for the war that inflicted one of the heaviest defeats on the Roman Empire and saw the death of an Emperor? The designer gave us an overview. Play is card driven with 2 or 3 options per card. Forces and objectives are asymmetric, so there is a lot of maneuver on the map. You can see there is a lot of promise in there. Although it can be played with more than two, there is no rivalry or separate objective. It just didn’t do it for my friends so I was faced with buying a game that wouldn’t get played. 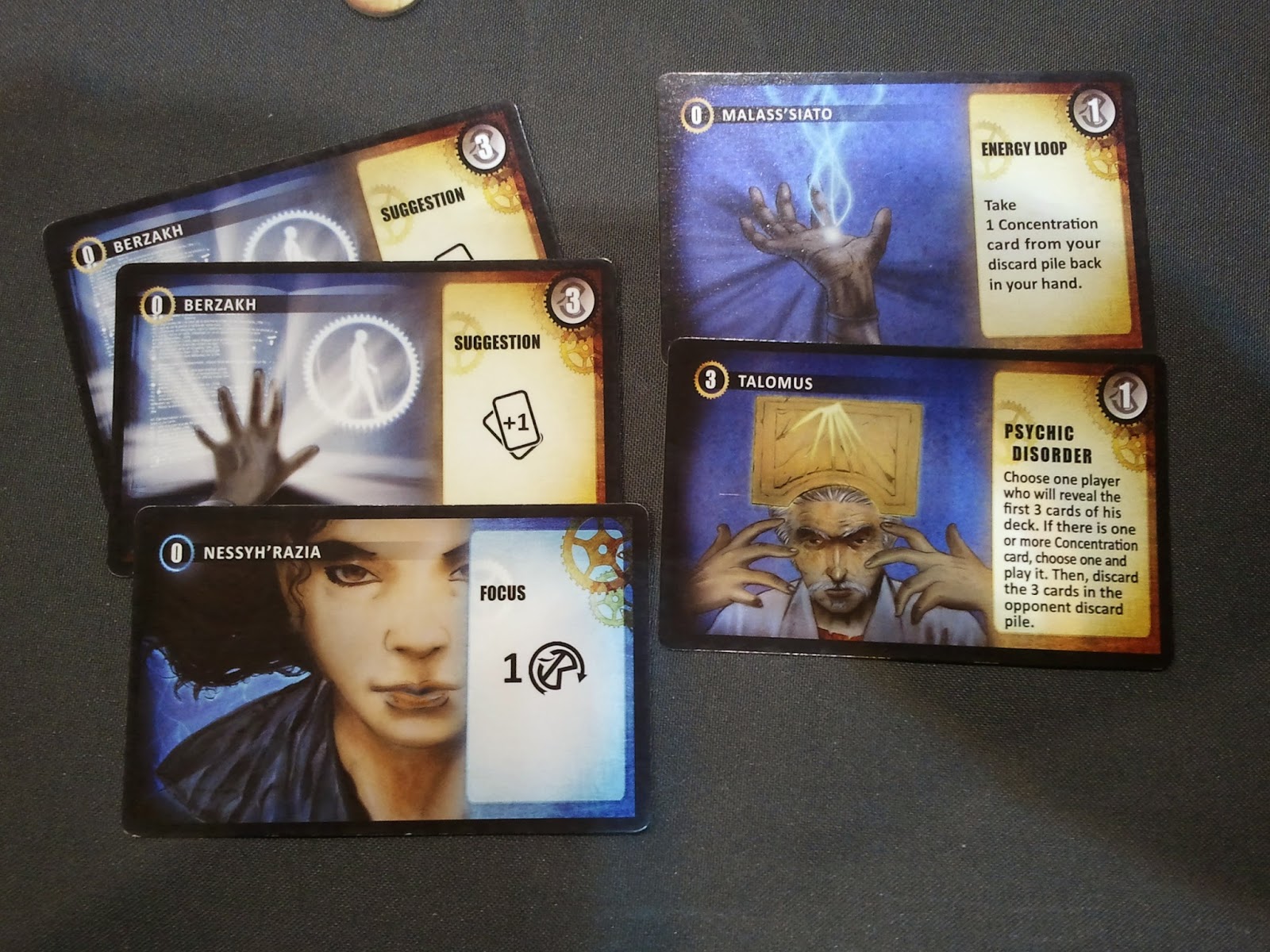 Time Masters tries a new approach to deck building by making time the key unit. It works, because the game speeds up and slows down. But I didn’t feel like I was achieving anything worthwhile by building the deck. Somehow I couldn't find a way to hold the cards due to the horizontal design. And who asks €35 for a card game these days? [edit: apparently I was misinformed at the booth or I misunderstood the price: the publisher has informed me the price in stores should be €30 and would have been €25 in Essen]

The evening in the bar and restaurant was spent with Unicum, Verone/Council of Verona and Auge um Auge. All three are excellent for beer and pretzels. Unicum offers a small box for a short game with a neat betting war hidden in it. This is fun, but I just wish the ‘uniqueness’ argument mattered a bit more. If you can get into the spirit of bogus arguments that helps.

I think that Verone is a truly great microgame, with all trying to influence the outcome of the feud between the Montagues and Capulets. It is worthwhile getting the French edition because I like the art better (and it automatically includes the Poison expansion, which is a neat addition). Pic above is the English version. 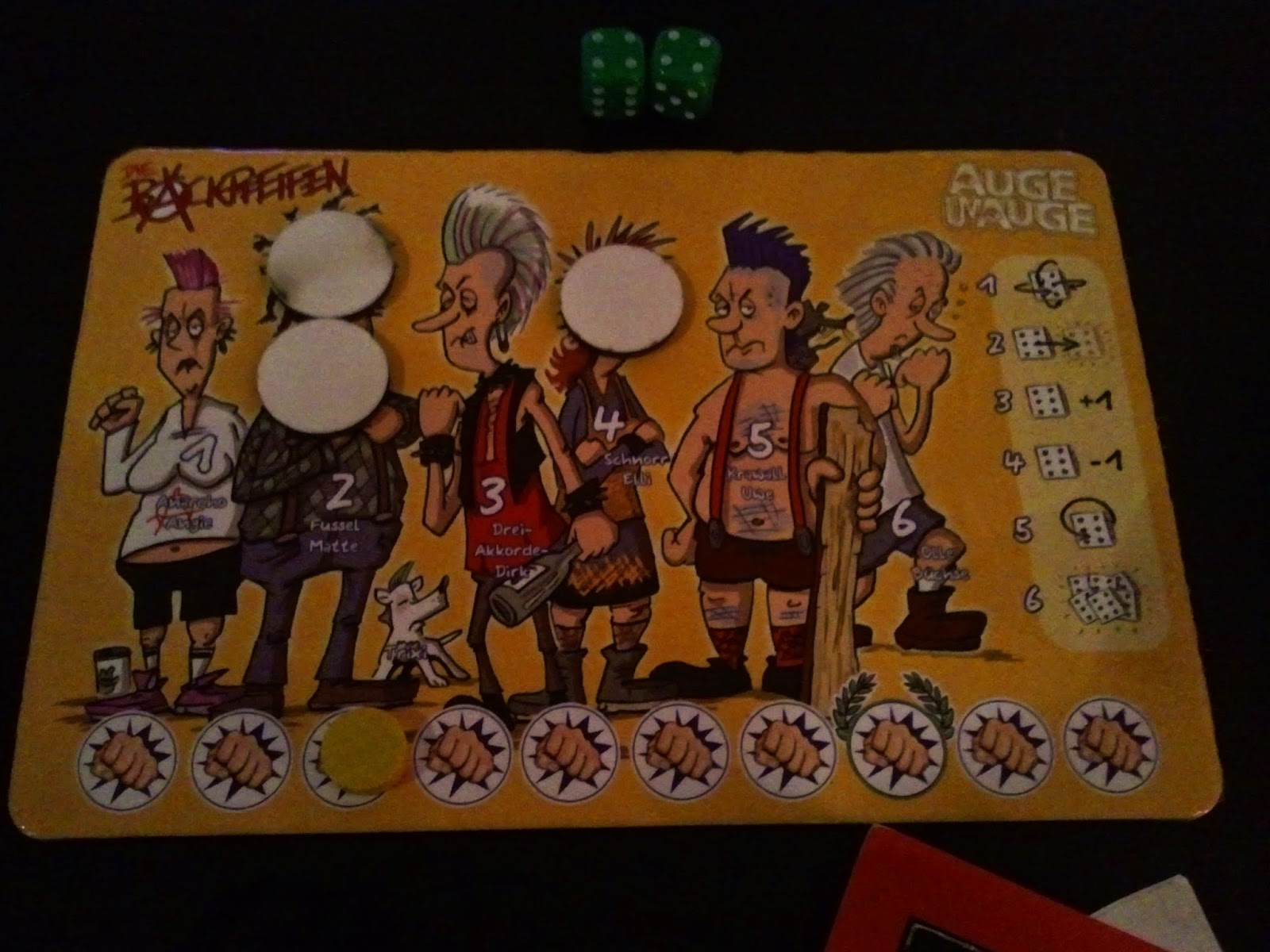 I’m not sure about Auge um Auge though. It is mostly a dice rolling fest with an alliance system. There are some abilities that help you create series, which you need to inflict black eyes on your opponents. But the alliance system is what makes the game interesting, because ganging up and keeping the front runner out of fist fights is the key. It may be a bit long for the amount of fun it holds. Art work nice, as always with Sphinx games.