Saturday's 'one more for the road' game was Mythotopia, Martin Wallace's new offering. It's a bit of a cop out, really, to apply a mechanism to a fantasy (or sci fi) theme, but it works out well enough. As in A Few Acres of Snow the deck building mechanism is subordinated to the map manouever. You build the deck from 4 basic cards and 6 area cards, which gives every player a unique set of resources (grain, gold, bricks and military goods). You can add to your hand by conquering new areas and buying cards from the market for gold. What cards are for sales changes from game to game. 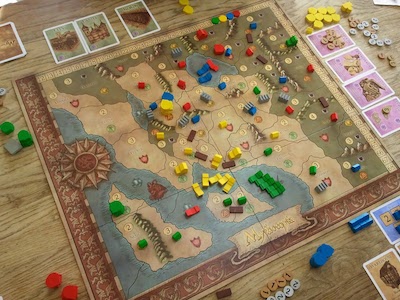 Another familiar feature of Wallace games is that you can take two actions, chosen from a wide variety of options. Some of the cards in your hand provide extra options (instead of playing them for resources). Most actions require playing resource cards from your hand. When you invade an area, the war is only resolved by a player ending it as the first action of her turn. This can protract wars as players keep adding resources to an area and tipping the balance.

There are challenges to your hand management once your deck grows, but the game offers the opportunity to place cards in a 'reserve' so you can use them for permanent effects or to save them for a better opportunity. But placing cards into the reserve counts as an action. There are also a few cards that help you draw extra cards or search your discard pile. Let's see about killer combo's...

You score victory points for the number of areas you hold and a range of achievements, the standard three being castles, cities and roads, and possible other special conditions: areas conquered, successful defense or dragons killed. However, for every type of achievement, there is a limited amount of times they can be claimed.

Victory is determined by a player claiming victory as the first action of his turn. Any running wars are resolved then, but you can only claim victory if you end up with the most points after resolution. We ended up very close to each other which made it impossible to clinch victory in the end. So we decided on a four way tie. I hope this is a one off bug, and not a feature. Despite the ending a good finish to the gaming side of the weekend! With the varying selection of cards available on the market and the changing set of victory conditions ensures a fair amount of replayability.

So what did I buy?

My buying strategy this year was focused on games I was pretty sure would make it to the table. I think I’ve managed that well. I’ve shied away from the overly complicated, and 2 and 3 player games, leaving micro games and multiplayer. Lost Legacy: Starship, Unicum, Auge um Auge, Mat Goceng and Verone have all been dealt with in the previous posts.

Lost Legacy: Flying Garden looks very much like the Starship game, but with another ending. The cards of Flying Garden and Starship can be mixed for variation.

I was torn between First to Fight and Race to the Rhine. The latter is a game that is very close in design to what I had in mind myself about the breakout from Normandy to the Rhine in autumn 1944, as a logistic struggle between three allied players, rather than two player campaign. It also looks good, but I didn’t take time to see how it plays because there were always people playing the demo.

First to Fight has all the players controlling Polish forces over the course of WWII. Because the Polish forces were few and widely scattered, I felt it is a great challenge to get all that into one game in a coherent way. In the end the decision was based on Race to the Rhine being three players which made it unlikely to hit the table regularly.

Marchia Orientalis and 15 Dias are both games with a strong historical theme, which I like. Maybe they end up being forgettable additions to the genre of tile laying respectively influence building games, but I’m eager to find out.