There was some stuff that I hardly saw but quickly formed an opinion about: 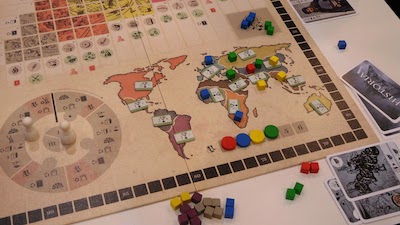 Good impression: Historia was very much enjoyed by my friends. It offers a two-axis take on civilization with room for conflict.

Battle of the Five Armies: looks great as ever (but many of the miniatures are the same), and similar to Battles of Middle Earth. But maybe we should play those more before buying this one.

Greenland: the premise is great, but it’s three players.

Quartermaster General: this could still be Axis&Allies with less combat

Raid & Trade: didn’t see it played or explained but looked as if it had a lot of numbers on counters and the board. Excellent minis and artwork though.

Lord of the Ice Garden looked great, but the unpainted miniatures expansion adds €40 to €55 for the basic game.

Bad impression: Athlas, Empire Engine (cube producing micro game), Swedish Parliament (although the policy axes were nice), The Walled City (looked like Carcassonne the City and ignored the contentious history of Londonderry), 8 Minute Empire expansion (there is something contradictory to a micro game expansion)

It seems like I’ll need to play less to see more. I did that the last few years but I think I prefer playing to running around.

So how did I feel about this Spiel?

Even though I’m no longer excited by this year’s euro offering (Arler Erde looks too much like Agricola and Panamax might be another multiplayer solo hit) and Sci Fi and Fantasy have become mainstream (almost everybody has by now jumped on the zombie bandwagon) there is still room for excitement and surprise.

The Polish publishers have blossomed by adopting euro mechanisms but they keep applying them to historical theme. Now Greek, Romanian, Spanish and even Indonesian publishers are following in their wake. There is still so much unused and unique theme around one might despair of the next generic fantasy game. Wallace still produces interesting games, even if they are occasionally flawed. And there are still publishers wanting to take risks.

It’s been a good year.