Lord of the Mind Bomb 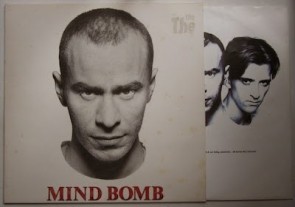 In addition to the recent post on weird connections, I also have this memory of reading The Lord of the Rings trilogy while listening to The The's brilliant Mind Bomb.

It must have been spring 1989 as I was preparing for my final tests of that year. I often had the house to myself. There were beautiful days that I would climb out of the window to the small area on the flat roof where there were tiles to sit on. Shielded from the wind, the spring sun was warm enough to enjoy. I think I read the books in less than two weeks, and all that time I had the album on repeat on my walkman, so it became a de facto soundtrack for me.

The I still feel that Mind Bomb fits the story better than the Howard Shore soundtrack, excellent though that is. Somehow, the OST is more rooted in the Carmina Burana and The Planets while Mind Bomb just gives it that much more contemporary vibe. There was a touch of bombast to it as well, but I guess that just goes with the wide vistas and epic events that Tolkien invokes. But the great thing is that in every aspect it is one whole and not just a collection of songs. So the mood stays with you.

It wasn't just the music but also the lyrics that went along well with the books. Matt Johnson's frequent invocations violence, war and madness influenced my interpretation of the book. The talk of evil, religion and obedience in The Violence of Truth poses an interesting contrast to the two dimensional good and evil of Tolkien's world.

In combination with the dark atmosphere of the album the creeping dread of The Fellowship of the Ring made a deep impression on me and I still rate it as the best of the three volumes.

that can make your little armies of the left

and your little armies of the right

light up your skies tonight?

The looming threat in Good Morning Beautiful and Armageddon Days Are Here Again was just made for the armies massing in the vales of Isengard and Rohan and on the plains of Mordor and Osgiliath.

August & September starts out as an intermezzo, with its mellow base and shuffle drums, but then slowly escalates into the manic creed at the end. It will have you at the edge of your seat in every passage of the book. Even Gravitate To Me has a leering attraction to it that closely resembles the working of the One Ring on anyone near it.

There is even a glimmer of hope in the ending of Beyond Love as the organ dies away.

Hard to imagine a better accompaniment to Frodo and Sam's lonely trek to Mount Doom than Kingdom of Rain, where Sinead O'Connor shows what a beautiful voice she has. Not forgetting the thunder at the end of the song reflecting the dying rumble of the volcano.

By the way, this was the song I heard on the radio one night and which made me decide to buy the album.