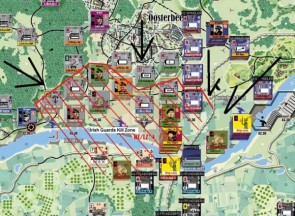 "Thick as pea soup," is what the boys' mothers back home might have said to describe the fog that greets the soldiers the morning of September 21st. The soldiers themselves, covered in grime and now a cold clinging damp, have more colorful words for it. However they talk about it, it means visibility is measured in inches not feet and a good soldier must be cautious lest he walk himself straight into the business end of an enemy's rifle.

So the day starts with the mechanized units creeping slowly north and south heading for a show down in the area between the Waal and the Rhine. The fertile but soft  fields of farmers who now hide themselves and their families in root cellars waiting for the storm to pass. They will still be waiting when the sun goes down.

The fog slowly clears by midday but the clouds do not. The allied soldiers laugh bitterly. What else is new. The pilots get another day off while the infantry does all the work. They aren't laughing for long. With the fog gone, visibility is restored and that means heavy fighting.

By days end, the tattered remains of the 1st Airborne have  been pushed to the riverbank. The bridge beckons as an escape route but all the troops that attempt the crossing, from either side, pay the price.  The bridge cannot be crossed.

The consolidated command structure of the German units pays off as they are more agile and can coordinate their movements. Infantry have crept up behind the raised rail bed and then rush across to take the armored units in the flank. It is too late in the day to have any decisive result.

If you are a tank driver in the Netherlands in 1944 you have a lot on your mind, a lot of things to cause you unease, and some things that cause you to lose sleep but few things will give you nightmares like the dreaded 88mm tank killer. Those things will make you wake up in the middle of the night screaming in a cold sweat.

Yesterday's rain and this morning's fog covered the movements of the units crossing the bridge at Nijmegen but once that lifts they find themselves in the sights of the murderous guns. Not only are they killers but their reach is long. Only a few guns can shut down the entire road network north of the city.

A few British attempt to rush the gun but are wiped out. The Cold Stream Guards go cross country out of sight of the 88's in order to close the distance but that is slow work. They are only taking up assault positions by sundown.

Another gun has a field of fire over the rail bridge and that too must be taken out but the German's in town fight like demons. They yield nothing.

South of the Waal:

The end result is that that huge amount of men and equipment that, if they could reach the battlefield, would turn the tide are instead backed up on the Club Route for miles and miles and miles. Meanwhile, those German formations that ran away the day before yesterday, after receiving a stern talking to, have returned east of the Groesbeek Heights. The American units have left a thin line to stop them, the rest moved North the help out at Nijmegen.

Dawn of the 22nd brings more fog but much lighter than the day before. It stands a good chance of clearing and allowing air support and a paradrop. Although, the drop might do more harm than good at this point.