"This is Such Bullshit" 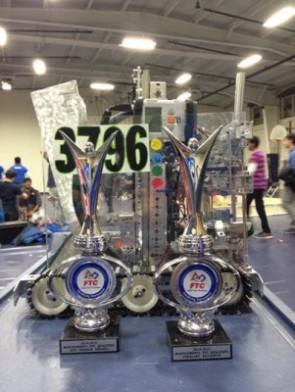 “You can’t wire this the way you did.”

This was the guy doing the inspection on the robot that my kid’s team had brought for competition this past Saturday.  I’ve been watching the thread entitled The Games That Shaped Us and I have an overwhelming candidate for my entry, but this thing with that guy happened before I got a chance to write it up, and now I have such a big honking example that I have to use it and don’t want to put 2000 words into a forum post.

It was turning out to be one hell of a morning, with our robot already failing inspection once for being too wide.  We had run this bot in a prior competition and it passed, but the box at this competition (your bot has to fit inside an 18x18x18 inch cube) was apparently smaller, perhaps more correct.  We had passed the other 25 categories and returned after removing the piece that made us too wide, but they had lost our paperwork.  So we were forced to reinspect from scratch, and the second guy didn’t like our wiring.  His complaint was that we “split the wiring after our main switch but prior to it entering the first control block.”  You now understand the nature of the problem as much as I do, which is not at all, but there it was.  The guy on our team that did the wiring was right there and when I looked at him he was confused and pissed.  He said that it was not only legal, and that it was “best practice, the way you taught us in the wiring training course," which he had taken from the organization throwing the event.  The judge indicated he didn’t care, that it wasn’t legal, and that it needed to change.

I spent a lot of years actively managing Dungeon Masters.  Most are good guys, but some are just dicks that take shit a little too seriously.  Some feel their ego is on the line if they don't screw you.  I spent a couple of decades avoiding DMs that said they liked DMing, an early sign of possible trouble.  Not a fast rule of course, but in general I wanted the guy that complained he’s already DM’d recently and wanted to play.  Players make the best DMs.  But when a player guy isn’t available you end up with a DM that thinks killing a character should be a minimum measure of their success in the job.  That’s when the people skills need to kick in, and when you start finding ways to make things work in your favor.

Sparky our wiring guy apparently has not developed that skill, and I could see “this is such bullshit” forming on his lips.  (Sparky doesn’t suffer bullshit well.)  So I stepped in pretty quickly.  I tried to look coachly, and asked the judge if there is a rule specifically addressing the situation, or if this was something that he had latitude to rule on case by case.  Appealing one is very different from the other and his response was “it’s in the rules.”  So Sparky, the other coach and I all turned to converse between us on what we wanted to do.  We were likely out for the day if we needed to change it.  This would take an hour to do and required parts we would have to scrounge from other teams.  The games would be running by then.

But then something happened.  We weren’t three words into the discussion when the judge added one minor adjustment to his prior sentence – “the rules don’t say you can split it like that.”

Poor man, he didn’t know I’m a dick about such things.  Heck, I’ve written articles about such things.  But he was still the judge and had kill-a-character level of power over our team, so there was a need for careful maneuvering to get things to fall our way, and Sparky still had “this is such bullshit” hot on the deck ready for launch.  So I turned back to him with a question on the academic point on he had just presented, in order to set a precedence on what suddenly appeared to be a crap call.  “Do the rules for this competition rule things in, or rule things out?”  This is a big difference.  When he clarified his prior statement, he indicated he was unsure of what he had said.  He tipped his hand, not wanting to be caught saying something incorrect.  So now the rule book was in play, and he was on the hook to convince us that he had made a correct ruling.  Should have kept his mouth shut.

As luck would have it one of the other kids on the team had taken liberty to pull a rule book out and was looking for the page that talked about wiring issues.  One page, short and simple.  Robotics encourages innovative thinking so they don’t want to be too restrictive.  There were six or seven concepts considered verboten for safety reasons, but none of them were in the neighborhood of our splitter.  The rules didn’t say anything about it, and they didn’t say anything about a huge amount of other things that presumably were fine as well, because they violate no rules.  That’s how rule books work after all.

Of course DMs are funny critters as you all know.  If you corner them they dig in their heels and show their teeth, and a DM can give out a nasty bite.  What’s more getting on the wrong side of a DM in a small group can have repercussions for years, and back when I played you had to meet other players the old-fashioned way – by actually meeting them.  (Advanced Dungeons & Dragons was only a couple of years old and people didn’t admit all that loudly to playing it because of rumors that people died playing it, in steam tunnels that for some reason are under every town.  I don’t even know what a steam tunnel is, but everyone knew about the kid that died playing Dungeons & Dragons in a steam tunnel.  I guess they brought a table and chairs down there with them.)  So as often as not the best option was to ask a rules question instead of telling the DM he sucked.  A DM trying to explain a crap call that a) doesn’t meet the rules, or b) can’t actually happen according to physics, is kind of over a soft barrel, and most likely will moderate his stance a bit to not look stupid.  Often this is enough to bring relief to their dickishness.

So in order to make sure our correction to the rules violation would fully address the problem, I asked him to show me the rule that we were in trouble with, rulebook gently laid into his hands.  There was nothing there.  “Oh, I remember” he said, “it was in the forums.”  He meant the Internet forums where teams can ask questions and there are official answers.  They usually address “rules of the road” issues on the game you’re playing, because it changes every year.  These are things that can be addressed by the running of the robot in real time, not a design change, and are reviewed prior to match.  “You mean the Internet forums?” I asked, because let’s face it, saying that you read something on the Internet is about as weighty as saying you heard it on an infomercial.  “How recently?” I added.  I put a curious tone on my questions, but I was pressing the point and I can’t imagine he didn’t understand the implications.  Boiled down, I was asking if we were breaking a rule or not, and if we were I wanted to see it.  He pulled out a three-ring binder three inches thick with 500 pages in it, apparently a printout of the forums though I didn’t ask.

You can debate all you like about the merits of a rule book that doesn’t contain all the rules, and as far as I’m concerned clarifications for competition programs where the teams have $40,000 budgets need to be codified somehow some way, and there should have been an official set of rules announced in advance that apply to the specific event at hand.  This is what errata are for – a concise list of official changes.  This seems pretty reasonable.  It’s not how it works currently in robotics, and that put the judge in a tough position.  His answer was what I had expected he would do – he gave us an Interim Pass because our wiring imparted no tactical benefit to us, but we would need to address it if we advanced to the next level of competition at a later date.  We were wrong, but we were in.  That was a solid piece of common ground that I was more than happy to stand on.  The other coach and the team lead wanted to bitch about it more, but we walked away and had that conversation in the far corner of the room.  Embarrassing or piling on a DM does you no favors now, and just invites trouble for later.

As it turned out we had to swing back around for our final sticker after software inspection and field inspection, and when we did they couldn’t find our inspection sheet again!  When they looked harder they pulled our original paperwork.  The guy that pulled it said, “hey, it says here that you didn’t pass the dimensions requirement” and he dropped their saggy-ass box on top of our bot and declared us too TALL this time!  He was failing us again!  My DM-management skills were tapped out at this point.  Bad-cop-bad-cop looked pretty damn reasonable, so I let the other coach pop off on him.  “Your box sags in the middle!  You can see with your eyes that it’s not 18 inches tall in the middle!”  Our bot’s tallest point just happened to be in its middle, at 17.75 inches.  The plexi box was quite old and quite clearly bowed in the middle the better part of half an inch.

The judge’s response – “the other teams didn’t have a problem.”

Engineers all, it was clear that none of these guys had taken a class in rhetoric.

“This is such bullshit.”  Sparky finally got his line in.

“Are we within the limits of the rules or not?” I asked.  I had a tape measure with me due to our prior woes and I pulled it out.  The other coach threw “I don’t care about your box, I care about the height of the bot, and I care about the rules.  You can use our tape measure if you like, but we’ve already been measured twice.  Unless this thing is growing, we’re legal.”

Given that inspections were running 45 minutes late the guy seemed a little more open to suggestion than most.  He signed the sheet, and we finally got to move on to competition.