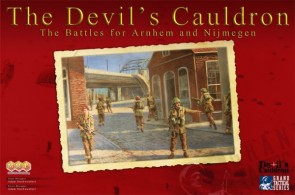 "90% successful,"is how General Montgomery described operation Market Garden. He may have been right but it was 100% a failure.

Early on the 23rd all hope of an Allied victory is squashed as the remnants of 1st Airborne are stamped out by the German forces north of the Rhine.

That however is not the worst news. The Red Devil's at least had the chance to fight. A chance to triumph. Not so for the poor unfortunate souls of the Independent Polish Brigade who drop onto a field covered by heavy guns and German infantry. They have no chance, those that aren't wiped out the minute they touch the ground are soon mopped up by the troops that awaited them.

The rest of the day sees bloody fighting as the increased visibility allows guns and tanks to unleash devastation on both sides. However, in the end, the positions remain relatively unchanged. The allies main forces are over the Waal and moving north but the Germans are able to counter with troops moving south from the recently cleared areas around Arnhem.  It is a relative stalemate in terms of position. Strategically, the German's have won. The only question is by how much.

The 24th again sees much fighting but with little result. The reinforcing British troops that have been stuck on the road low these many days are finally to the field of battle but it is no use. They are too late. They know it. They fight not to win victory but to lessen the defeat. They attempt to turn the left flank of the German line but the constrained nature of the battlefield cut by the raised roads make full deployment impossible and the number of German troops necessary to halt them is few.

The streets of Nijmegen still echo the sounds of battle. The German's area of control is squeezed smaller and smaller but they fight on. Preventing full use of the bridge even now. Feldt has sent a formation North to help relieve their comrades. More realistically they will serve only to delay the Allies still further. Feldt himself will not exit this battle unscathed however. His heavy artillery left unguarded is over run by motorized units of the 82nd. There will be a reckoning for their loss at HQ later and his excuses for that and the relative poor performance of his troops will be questioned.

Further south around Groesbeek, independent formations of US armor punish Feldts infantry as they climb over the heights. It is practically a slaughter.

While the campaign calls for another full day of fighting, I have decided to end the game here. In game terms, the Axis has won a "marginal victory" being defined as no allied units North of the Rhine but still having contested ground North of the Waal. I don't see the Allies having a realistic chance of getting over the Rhine. The one bridge open is a death trap for any unit attempting to cross. Likewise, I don't see the German's pushing all the Allies south of the Waal in just one day. There are too many of them. If the final airdrop were to happen, it would only bring more US troops in around Goesbeek and that is irrelevant at this point.

I think the campaign  played out relatively historically but not so much that I felt I was just along for the ride. If, as the Allies, I had better used certain abilities I neglected I would have stood a better chance of altering history. Road blocks, rear guards, doubling timing, these things would have allowed me to bring more force to bear quicker. I'm not certain it would have changed things but you never know.

The Allies certainly were beset with bad luck. Some of it historic regarding the weather. Having those paradrops happen as soon as possible would make their objectives much more obtainable. Mother Nature, though, doesn't give even a small damn about the plans of mice nor men and that had a big impact on the game and on the real battle. Some of the bad luck was behind the scenes too. The 1st Airborne's die rolls for command points and dispatch points, the two resources that allow you to activate and use units, were horrifically bad all through the game. To be sure, the numbers needed are designed to reflect the command and communications problems historically experienced but this went beyond that. That's not a bad thing though. Luck adds drama and I like dramatic games.

As for the Germans, they had their share of trouble too. The most prevalent was my internal bias to root for the Allies. Being American I naturally root for the US and being American I naturally root for the underdog. Make no mistake, the Allies are the underdog in this campaign. I often had to remind myself to be as aggressive and unforgiving as I should be when playing the German side. On the whole I think I did a pretty good job of it.

Fedt's Korp (light blue units) were the goats of the entire campaign. First they routed when encountering the Americans and then when they came back they were just beat like dogs by the US armor units. The loss of the artillery (unwisely not put into an Artillery Park which would have made them immune to overrun) was crippling. They had held off the Americans fairly well but without that support they were doomed.

I really enjoyed playing the whole campaign. I like how it was a drama in 3 acts. The initial rush for the bridge followed by the attempt to grab the middle ground and rescue the heroes and finally the snarling defiance of the last days. I always had the feeling that maybe, just maybe, I could pull it off with the Allies. That I was just a smidge from doing what I needed to do. As the Germans there was the early desperation of too few guys holding until the back up arrived. Then the problem of how best to delay and frustrate the Allies. On the whole though, the Allies have the more interesting side to play.

So ends my play of The Devil's Cauldron.

1) A reprint has recently been announced for this game and a friend asked if he should buy it. I answered that it depended on what he was getting it for. As a collector of games, it is a beautiful production. I really can't stress that enough. The counters, maps, rule book are all great. And in that sense, it is totally worth it. But! But it's huge! In all seriousness, unless you have an entire room and a large room at that where you can leave a game set up without being disturbed by children, pets, or sudden gusts of wind, you are never ever going to play the physical copy of the game. Likewise, good luck finding a person or people to commit to the time it would take to play the whole campaign. Even playing by myself it took me several months. In a dream scenario I would love to play face to face with one person commanding each formation and two "overall commanders" playing the direct activation chit and giving overall guidance. That will never happen. But it'd be cool.

2) I was intimidated by the rules at first but I really was surprised at how quickly they became internalized. The system flows and makes sense. The design of the counters is fantastic with all the information you need in numbers and colors. You never need to look up how one unit differs from another it's all there. Type of movement, type of ammo, range, fire power, morale. Also there are exceptions (mostly based around terrain and special events) but far less than any other "monster" game I've encountered. Game design wise, it's an impressive achievement.

3) Certain aspects that are usually dismissed are given a great deal of prominence here. I may have said before that artillery and mortars play a very important role. Not just for the damage they do but for the "barrage" effect of hindering the fire power of the victim and more importantly, reducing the line of sight of that unit to just one hex allowing for movement of units without being hammered with opportunity fire. Also the weather effects are not overly complicated but the adjustments they make have a palpable effect on the game. Movement costs being increased by 1 point per hex during fog or rain has results far in excess of what it sounds like it should. And night time with double movement and -2 to attack makes it useless for almost anything other than regrouping. Command and control as expressed through Command and Dispatch points is simple and effective and minor tweeks really telescope out so that you can feel the friction of the 1st Airborne's command and the growing power and efficiency of the German's as they recover from the shock.

4) Dealing damage in a meaningful way is somewhat difficult. To give a 'step loss' to a unit (flipping a chit over to it's reduced side) is no small feat but unlike other wargames, once it's reduced there is no way for the unit to ever get back to full strength. A step loss is devastating and colored my decisions all through the game. "I need that space, but I need these guys at full strength". Assault was particularly painful in this respect. Even against a relatively week or suppressed unit, it was never risk free and the units in and around Nijmegen were particularly punished by it. But...fighting in cities is slow slow slow at range...and time is ever pushing the Allies to be aggressive.