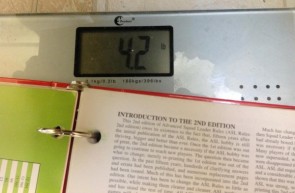 That's what the ASL rulebook weighs. Now it says something that you can use a measurement of weight to describe a rule book but when you consider that the pages that make up those 4.2 pounds are large and contain two columns of very small print you are taking it to a whole new level.

I'm not saying anything new here. That's the game's reputation, being impossible to learn, too hard, too long, too involved, and most importantly requiring too large a commitment. It's the reputation that makes most gamers wince or shake their heads or wave their hands in dismissal when it is mentioned. In the modern world of gaming this is to be expected. A large segment of gamers seldom play a game more than a few times before they move on to the latest release which more often than not is merely a reworking of the same old tropes contained in the last game. Despite that, the horrible truth is that they are right.

If you were to try and read the rule book you would hit a brick wall. A brick wall of dense technically written text. "A DEFENDING Infantry unit already marked with a First Fire counter may Defensive First Fire again during that Mph as Area Fire by flipping its First Fire counter over to the Final Fire side. Such fire can leave Residual FP but if using a MG/IFE is treated as Sustained Fire and penalized accordingly." That is but two sentences of several paragraphs describing one subsection of one rule that is in turn part of only one of several phases of any given game turn. This goes on for 4.19 more pounds.

Lets face it. No normal person, and here I assume you are an average Joe or Jane and not some human computer, is going to batter themselves against that. To learn this game on the rules alone would be neigh impossible. By oneself with only the game components, setting up scenarios and playing them as best you can with the rule book next to you, it might be possible. All the rules are there and  the language is very precise and consistent. Curiosity would not be enough of a motivator. It would require fascination bordering on obsession. It would also require you to have a great deal of time. The time required to take a high level mathematics course at a graduate level. Every night, alone, at the desk, brow furrowed. The worst part being, that you would still make grievous errors and play it wrong.

Who would put themselves through that when there are so many games that require so much less that could be learned and played in an hour? Why would you? How could you with time being such a precious commodity?

In the days when this game came out perhaps it might have been possible. The game is a reworking of the classic game Squad Leader, a complex but learn-able game in it's most basic form. The people that would have bought ASL on release would have been those familiar with it's predecessor and the fundamental concepts which form the bedrock of both games are the same. So those early adopters would have had a grasp on the ideas and procedures in the game. They'd have been starting from ground zero but that is still better than starting in a state of free fall at terminal velocity.

But those were the days before the internet and there-in is the novice's salvation.

The internet more than anything else allows the learning of this game. It provides the most important thing of all, a way in which to connect with an experienced player willing to teach the game. This of all things is the most important. A veteran taking the time to work through the game in small steps is the best way to learn. Even though what I have said before is true it is also true that the fundamental concepts upon which those 4.2 pounds rest are simple in of themselves, intuitive and logical. They can be mastered in the way any skill can be by starting at the beginning and adding layers and nuance as you go. What's more, people willing to teach are not that hard to find. They are often eager. All one has to do is ask.

The internet also provides the arena in which the game can be played via Vassal an online program that allows players to use an electronic board and pieces. Played live or via email. So your mentor could be anywhere on earth from Hong Kong, to Kuwait, to right down the street. Played at your own pace. Played with feedback to not only explain how your soldiers were blown to bits but why and how you might have done it differently.

But why? Why go though all this. Why and how can a game like this continue to exist?

The answer simply is that it gives as much as it demands.

A current buzzword in the gaming world is "Sandbox". A term applied to any game which is less than a totally scripted rail road to a forgone conclusion. ASL is not a complete sandbox because the players have win objectives and the units and pieces have specific attributes but it is as close as any board game can get. A player is told what he is trying to do and what he is given to do it. And that's it. It's left to him or her to figure out how to make it happen. The payoff for all those 4.2 pounds of rules is that just about anything is possible. Your ingenuity is really the only limiting factor. The best of war games seldom tell you what to do. They tell you how to do what you want to do. Here ASL is king.

It isn't rules that will win this game. It isn't lucky die rolls. It's your brain power, your plan, your skill. So when you win, if you win, you earned it. Earned it with more than just an ability to figure out the most efficient way to change one resource to another. Earned it with more than just slavishly following a script. The victory will be yours and you will savor it.

DukeofChutney replied the topic: #201967 07 May 2015 10:33
I've never tried ASL, partly because i don't have the cash, and partly because im generally not that into squad level stuff, but the absurd detail does intrigue me. Good words. 4.2 pounds is one heavy rule book.

A grizzled German machine gunner constantly laying a path of death until a heroic attempt, at the end game, where he dives into the road with a satchel charge desperately attempting to enter a building, run up the stairs and blow his opposing machine gunner to bits. He never made it past the road.

The brave Germans throwing a satchel charge up the stairs which was promptly kicked back by the defenders and blew up in the firers face.

Said escaped prisoners desperately trying to pick up a discarded flame thrower and use it against the enemy but not figuring out how to work it.

The final German charge into the Commissars fortified house with the entire game finally going down to a couple of die rolls.

The guys who entered the sewers but got lost for half the game but also the guys that entered the sewers and popped up through a manhole into the actual fortified house making it that much more difficult for the Germans to clear the house. My shit stained heroes.

That is ASL for you. Also I won, a very important point.

I am also obligated under contract to accept the totality of defeat at the hands of Komrad Waller. He even made me listen to The Internationale from start to finish. It was not pleasant.
Read More...