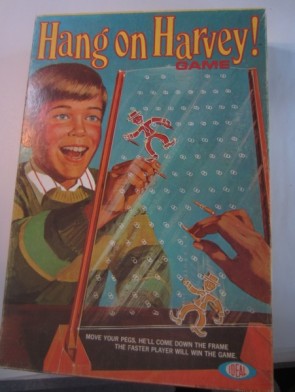 Games that were memorable and/or influential to my later gaming choices.

The earliest game I recall playing as a kid was a 2 player  called "Hang On Harvey" from Ideal Games. The large box had a great illustration of two kids playing the game and having a blast, and as cheesy and standard as those game covers were I love them to this day, the message being "you and your friends/family WILL have fun playing this!". I probably stared at that image as much as I played the game.

The game board was an upright board consisting of two panes of clear hard plastic "glass" with holes on both sides. Each player had their own Harvey (a Harold Lloyd lookalike but sans glasses) and four long thin plastic pegs. You would start the game by placing two pegs into the top row of the board and the slide your Harvey in-between the two panes of plastic. When both players are ready someone says go then both players insert and withdraw the pegs, lowering his Harvey onto lower pegs and eventually to the bottom. race to get their dude to the bottom of the board as fast as they can without letting him fall down . Both Harveys were shaped in a way that allowed them to find interesting areas to hang or from under their arms, has one curvy boots or hooked hands. I have no idea what the actual rules were but the biggest was thrill was trying to knock each others Harvey down with a well placed drop or going for the Hail Mary by placing our pegs on the bottom row and letting Harvey free fall from the top.

Eventually the pegs ended up as stir sticks, the Harveys in various undercover missions with Big Jim, GI Joe (the bearded ones) or throwing stars and the board...who knows. It may well be a shitty game for all I know, but more importantly in hindsight it was the adrenaline-fuelled time spent with my brother that really mattered.

Cool idea for a blog, I'm curious to see what else shows up.

stoic replied the topic: #214085 03 Nov 2015 17:34
That's just psychotic exposing young minds to the terror of watching someone, in this case, an innocent victim named Harvey, fall to their death.
Read More...