Welcome back to a very special installment of the F:AT Snack Attack.  In previous articles we’ve looked at Kettle Corn and the world’s tastiest corn taquito chip.  This time I’m going to be covering something very near and dear to my heart.  Something that I’m sure many of you are all familiar with.  Yup, it’s the tasty green concoction which looks like Re-animator serum.  It’s Hi C’s Ecto Cooler!

This time I’m not alone.  No, Ecto Cooler is too much for one man to properly review.  Besides, why should I even attempt to analyze this blast from the past when we have a resident Ecto Cooler Sommelier on hand?  Our very own Josh Look has agreed to share his wealth of knowledge on all things Ecto.  I’ve paid a king’s ransom for his services and he has agreed to carefully sniff, sip, gulp, chug, and imbibe can after can of Ecto Cooler to bring you the most comprehensive and knowledgeable information money can buy.  Without further adieu, Josh, please take it away!

JL: So you know how they say, "You don't know what you've got until it's gone?"  Truer words could not be spoken when it comes to Hi-C Ecto Cooler.  You'll hear countless 30-somethings exclaim that "Ecto Cooler was the flavor of my childhood," but I doubt the majority of them know the full weight of their own words.  Look, if you were alive at any point during the 1980's, chances are you either like or love Ghostbusters.  If you were a kid in those days, your experience with the movie might have been a bit richer with the Real Ghostbusters cartoon, the absolutely killer toy line from Kenner, and yes, Ecto Cooler.  But the early 90s came eventually.  Ghostbusters became a beloved classic, still appreciated by folks of all ages, but the world moved on.  But not all of us did.  There are those of us who never put away the Proton Packs and PKE Meters, and for us, this re-release of Ecto Cooler might classify as a legitimate significant life event.  Peter Venkman would ask, "You're not sleeping with it, are you, Ray?"  I'm not sure I can comfortably answer that question.

When a new Ghostbusters movie was finally a definite thing (a delightful flick, by the way), I knew it was now or never for Ecto Cooler to return.  Coca Cola and Minute Maid did not disappoint.  Back in the classic juice boxes (complete with the old-fashioned Hi-C logo) and the new color changing can, it's everything I remembered.  Everything about it is unmistakable.  The pleasant blend of sweet and tangy citrus flavors, the nuclear green color that cannot belong to anything else on this earth, the insane amount of sugar...I took my first sip and immediately went back to better times.  Some have had a hard time getting their hands on it, but me?  I arguably have too much.  No joke, I have a stack in my basement.  Yes, asymmetrical beverage stacking.  Just like the Philadelphia mass turbulence of 1947.

The Internet can say what they want about the new Ghostbusters.  It brought back Ecto Cooler.

I think we are both in agreement that if you’re looking for something to treat your gamer pal’s to this Halloween season, this re-release of Ecto Cooler will surely bring smiles to everyone at the table.  I myself like to drink it straight up outta the can.  However, for those looking for something a little more adventurous I’ve come up with some great alcoholic recipes. To the surprise of absolutely nobody, Ecto Cooler and BOOZE mingles perfectly together like the Keymaster and Gatekeeper.

Here are all of the basic bar tools that I recommend for mixing these drinks.  You can easily get by without them, but for consistency I measure everything each time.  Until I get too drunk to care. 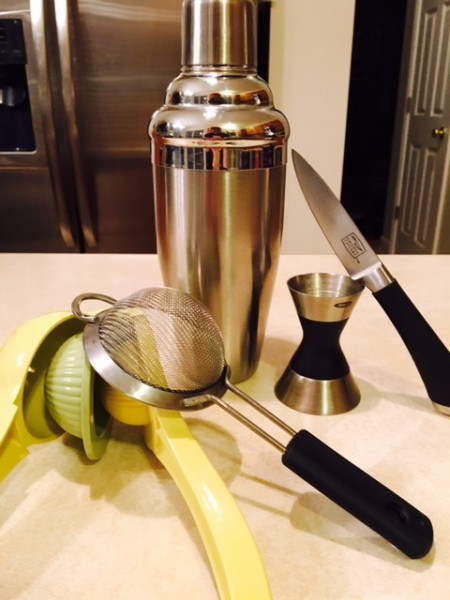 First up we have the Slimer-a-rita!  Upon re-tasting Ecto Cooler I was reminded of its bright citrus punch that leans heavily towards orange and tangerine overtones.  That coupled with Willy Wonka levels of sweetness meant it would be a perfect substitute for a sweetener in a classic, simple, margarita recipe.

First cut a lime in half and use it to rim the edge of a cocktail coupe.  Then in a 50/50 mixture of salt and sugar that has been dyed green, gently rim the glass.  Afterwards fill with ice cubes.

Next fill a shaker with ice and add the following ingredients:

Shake all of the ingredients and then strain into the cocktail coupe.

Finally gently shake and the crack open a can of Ecto Cooler to “slime” the drink.  Use as much or as little Ecto Cooler as you want.  For a margarita with a little more tartness, use just a splash or two.  For something a little sweeter and greener add in a generous amount.  There is no right or wrong choice.

Garnish with a thin slice or two of lime.  Drink!

This goes down easy and is guaranteed to make you feel so…FUNKY. 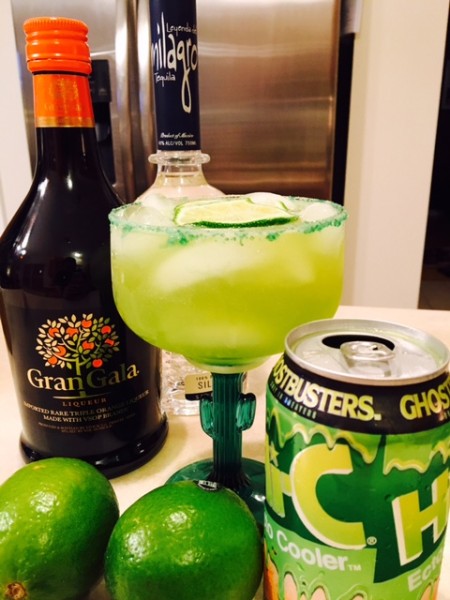 The inspiration for this drink is driven by my love of sickly sweet and surprisingly strong Polynesian drinks.  I wanted it to taste like almost like a drunken Orange Julius.  After a few recipe tweaks I think I mostly succeeded.

Fill a Collins Glass (tall and slender) with ice

Then add the following to the glass:

Then top off the rest of the glass with Ecto Cooler.

Garnish with an orange slice. 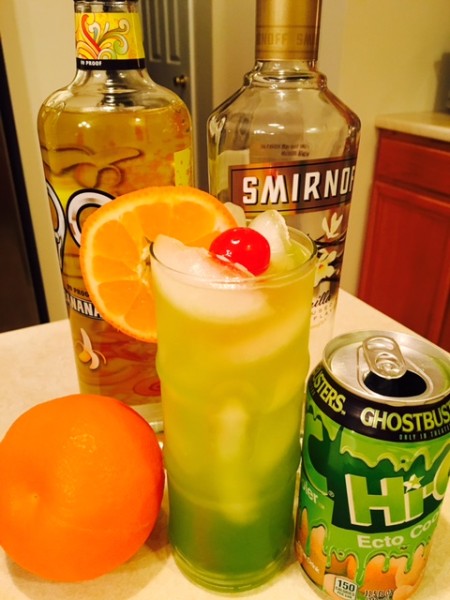 A special thanks once again goes out to Josh Look as he was the one who inspired this idea.  He has treated me to many a delicious Ecto Shandy.  Taking his basic concept of mixing Ecto Cooler and beer I’ve gone just a step or two further.  The end result is something absurdly drinkable.  When my wife blind taste tested it she was astounded at the flavor.  She looked at me and then at the bright green glass with a flummoxed stare.  “Does this have champagne in it?” she inquired.  I laughed and told her, “Sorta.  It’s got the champagne of beers flowing within it!”

Squeeze in the juice of half a lemon.  Roughly 1 oz.

Fill the rest of the glass with Ecto Cooler

For something with a bit more Oomph…add 1 oz of vodka prior to adding the Ecto Cooler.

As a famous New Yorker once told me as a child, “It’s Miller time!” 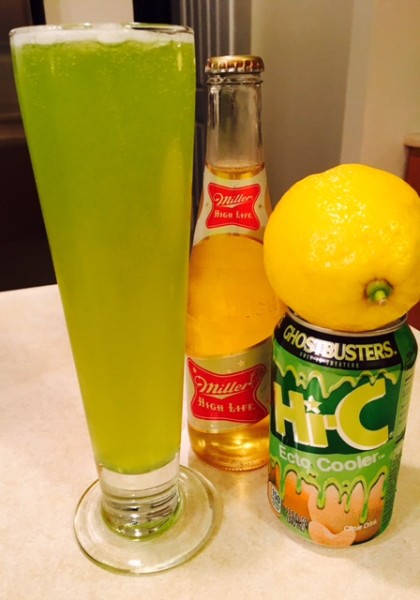 Thanks for reading and feel free to share your own Ecto Cooler creations with the rest of us.

Hey look, mister. We serve hard drinks in here for men who want to get drunk fast, and we don't need any characters around to give the joint "atmosphere". Is that clear, or do I have to slip you my left for a convincer?

Columbob replied the topic: #234665 21 Sep 2016 09:55
Man these articles are fun! Even if those snacks sound thoroughly disgusting (maybe not to the tastebuds though) and I'd never ever buy them. Do they even have Ecto Cooler in Canada? No idea.

Ecto Cooler was such a massive part of my childhood and finally getting it back is something I never thought would happen. Yeah it's basically a sugary abominations, but fuck it...it's MY SUGARY ABOMINATION DAMMIT!

For those of you crazy enough to make some of these drinks, the Slime-a-Rita is probably your safest bet. The recipe is my basic simple margarita recipe and I just subsitute Ecto Cooler for the agave syrup. It works surprisingly well.

Also, the Shandy is better tasting than it has any right to be. I love the slow color change of Nuclear Neon Green to Weasel Piss Yellow...it really is a lovely gradient in the glass.

As a happy coincidence, this article was published on Bill Murrary's birthday! I thought that was kind of cool coincidence. Though, if there is a person that hates Ecto Cooler more than Michael Barnes it's probably Bill Murray....
Read More...