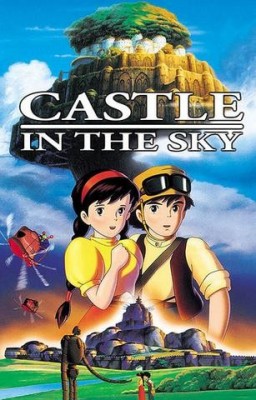 Laputa: Castle in the Sky

The first thing I'm stuck by is the very imaginative world in which the story takes place. A mix of the fantastic, the historic and magic. A world that is powered, for the most part, by steam and coal. Where transport is by trains that ride on improbably suspended tracks over the gorges and cliffs that surround the town. Where flight is accomplished by machines more in line with Leonardo DiVinci's visions than those of the Wright Brothers. Where a vague militaristic government dominates the land through a fleet of air ships and spy planes. All the while the legend lives on of the floating lost city of Laputa.

The story starts out fairly simply, at least by adventure, science fiction, and fantasy standards, with a young girl being transported via an air ship to an unspecified location when suddenly sky pirates attack in attempt to gain the girl's jewel necklace. In the course of the attack she falls, one might suspect deliberately, from the ship but rather than be killed her magic crystal activates allowing her to float into the arms of an unsuspecting orphan boy.

There follows some very entertaining chase scenes where the young couple are pursued by the government and the pirates all the while encountering some charming denizens of the town. From the body building steam mechanic to the strange old Uncle who roams the labyrinth of abandoned tunnels beneath the town.

Subtly and almost without me noticing though, the story starts moving into much more adult and thought provoking territory dealing with such themes as loneliness, family and belonging, to power and compassion. All throughout though is a sense of melancholy. It isn't a movie that will bring you to tears and it does end on a hopeful note.

The sub story involving the relationship between the young couple and the sky pirates really is the highlight of the movie for me though. They go from appearing as cruel and greedy maniacs to being shown as an accepting and loving family. Their pirate ship is the kind of place adventurous kids would love to live.

The robot guardians are also terrifying but at the same time they drew in my compassion. If you think about it, that is a thing many writers try to accomplish but fail to do but here it's done masterfully.

The movie was released in the early years when Steam Punk was entering the then "nerd" culture. A lot of the tropes of that genre are seen here. Including but not limited to the wearing of goggles on the forehead. To it's credit though, Pazu, the hero, is actually shown to be using them in a few scenes. Also there is no doubt in my mind that Dola, the female head of the pirates, was a direct inspiration for Mom from Futurama.

I was greatly entertained and pleased with this movie and it was a great start to Ghiblapalooza.

repoman wrote: Bought the 17 movie collection. Thought I'd share thoughts on them as I watch them.