Ghiblapalooza Episode 2 - Grave of the Fireflies 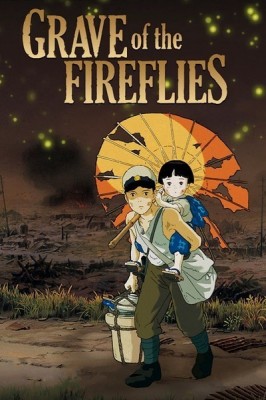 Grave of the Fireflies

The opening scene sets the tone when a young boy dies an ignominious death in a train station and we watch his spirit join his sister's on a near by bench. Grave of the Fireflies is an attempt at conveying the desperation and grief of civilians suffering the effects of a horrific war.

Studio Ghibli is known for it's whimsical animated stories but there is no whimsy here. The movie is filled with the dark grueling images of the devastation wrought on Japanese cities by the firebombing raids of the United States Air Corp. The reduction of homes to ashes and the horrific death of the two main characters' mother from burns.

For the next hour and a half we get to watch as Seita, a boy aged around 15, and Setsuku, his sister who seems to be 4 or 5 years old, struggle to survive in the bleak environment of war time Japan. As the opening has already told us, it is a struggle doomed to failure.

However, the characters are such that I was rooting for them anyway even though I knew how it would all end.

I was really moved by the slow slide of Seita. How he strives to maintain a cheerful outlook for his sisters sake but all the while losing his own hope and really his own grip on sanity punctuated by him laughing like a mad man as he returns from a scrounging expedition in a thunderstorm.

The frustration and anger at being utterly helpless to avert the inevitable Seita feels was painful to me. It made for an uncomfortable viewing experience. I wanted the movie to end much sooner than it did but like Seita I had no choice but to endure it.

The fireflies serve as a metaphor for the short length of our innocence, our dreams, and ultimately our lives.

mc replied the topic: #280098 21 Aug 2018 04:49
Oh my god. I had this recorded at one point and it fell into the abyss of recorded stuff that you promise yourself you'll watch someday. For once the day arrived, and I had only the dimmest recollection of what the TV guide had said - I think I'd even forgotten that it was Miyazaki, although I had the impression that it had similar themes. "I think it's about conserving a forest or something", I said to my partner. We watched it.

I don't think I ever need, want, or could watch it again.

I haven't been so wrecked after watching a movie since Requiem.

In High School my daughter had to pick a movie for her history class to watch that was related to what they were studying. She chose Grave of the Firefiles, and the teacher rejected her pick - saying that while it was incredible, he couldn't bear to watch it again.

But she stuck to her guns, and the class watched it, with the teacher crying quietly in the back.

It came back to theaters here recently and we thought about going to see it - but just couldn't. We did see Princess Mononoke on the big screen, though, which we hadn't done before. A treat!