Ghiblapalooza Episode 3 - Whisper of the Heart 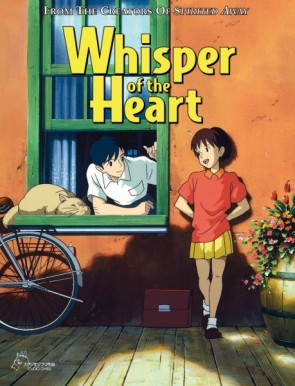 Take me home country road, To the place I belong

Whisper of the Heart

The coming of age tale of a girl, Shizuku, who is at that precarious age where she is no longer a child but is not an adult either. She is 14 and in her last year of Junior High. She is a dreamer and a reader but is confused, as all teenagers are, about who she is, where she is going, and if she is good enough.

In less skillful hands, this could have been just another teen romantic comedy and there are elements that are all but required for the genre. The "meet cute", the initial dislike of the object of her affections, the forced separation, and eventual reuniting. They are all here.

So what separates this movie from any of a thousand others with the same general outline?

First is that the setting and supporting characters are so completely and brilliantly drawn. I have never been to Tokyo but I feel as if I have. Not just the neon billboards of downtown that Hollywood always shows us but the hills, the alleys, the neighborhoods and out of the way spots that we never see. The supporting characters from Shizuku's family to her classmates to the roaming alley cat, Moon. Every one's personality is brilliantly expressed to a degree all out of proportion to the actual amount of time they spend on screen.

Second is that the story is just sweet. It isn't filled with nihilism or impending disaster. It hasn't the least bit of cynicism in it. It isn't until you see a story so devoid of bitterness that you realize how many films these days are overflowing with it.

Watching this movie I was whisked back to those days when I was young and uncertain what the future might hold for me but I was sure it would be something good.