Ghiblapalooza Episode 6 - Nausicaä of the Valley of the Wind 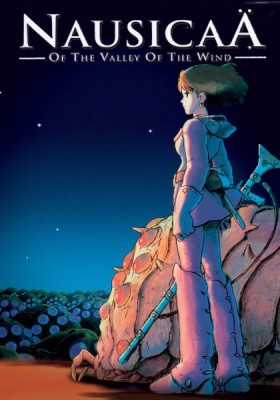 "There is nothing to fear."

Nausicaä of the Valley of the Wind

This is not technically a Studio Ghibli production. It was made in 1984, a few years before Studio Ghibli was formed but it is all Hayao Miyazaki. He wrote the comic upon which the screenplay is based. So this is his vision and what a vision.

The setting is a post apocalyptic world where the civilization of technology was destroyed during an event called the 7 Days of Fire. During the thousand years that have followed the world has been slowly covered by the Toxic Jungle filled with plants that emit deadly spores and giant insects of various types that share a collective hive mind so that when one is attacked it can summon aid from all the bugs in the area including the dreaded Ohmu which are neigh indestructible and whose multiple eyes glow red with rage when on the attack.

This is another story, though the chronologically the first, of nature versus man. The Toxic Jungle is spreading and destroying the remaining settlements of mankind. Nausicaä and her Uncle, Lord Yupa, spend much of there time exploring the jungle at great risk to themselves looking for answers as to why it is spreading and how it can be stopped.

On top of this, one of the remaining tribes of men have found an egg that if hatched will produce one of the giant robots that were used in the 7 Days of Fire. An airship carrying this egg crash lands in the idyllic Valley of the Wind not only bringing the embryo robot but also spores form the jungle which will rapidly spread and destroy the valley if not stopped. Word gets out that the super weapon is here and the factions begin to fight to take control with the valley folk, trapped in the middle, forced to fight as well.

Thus the folly of man is illustrated as our lust for war far outstrips our love for survival.

There is so much good in this movie. The world and the backdrops are just fantastic. The jungle, the wasteland and the pristine Valley of the Wind are all richly shown and developed. Miyazaki no doubt saw Bashki's movie Wizards(cir 1977). Lord Yupa riding an ostrich type bird through the wasteland and the militaristic tribe of Tolmekians using World War 2 type technology are cribbed from there.

The action scenes are great as well. Very dynamic and very tense.

The best part of the movie is when Nausicaä gets on a bird like glider and flies over the landscape. These aerial sequences are exhilarating and the movie is worth watching for these alone.

There are some flaws as well. The convoluted ending where Nausicaä sacrifices herself to save the valley, gets resurrected by Ohmu magic and is then proclaimed the prophet that will lead humanity to a new world of purity is all well and good but left me a bit unsatisfied. It seemed almost like an ending put together after Miyazaki got to where the end should be and was stumped as to how he could pull it all together. Over the end credits are some brief vignettes of Nausicaä and her people living with the bugs and the jungle but it is never clear how this is possible.

Also the music during the movie seems very much like what one might have heard in an arcade full of video games in 1984. Maybe you dig that kind of thing but it seemed way out of pace with the music used in his later movies.

Lastly, the message of the consequences of war and environmental destruction is very heavy handed.

No matter, the movie was enjoyable even if it's not the best and you can see the themes and ideas Miyazaki will use later after Ghibli is formed and making his own films.

1) Disney, which became the distributor for Ghibli films in America, must have been betting pretty heavy on this film. The voice actors for the English version are all well known such as Patrick Stewart, Edward James Olmos, Mark Hammil, and Uma Thurmon. This was the version released in 2005.

2) I was originally a bit taken aback by what appear to be a lot of "up skirt" shots of Nausicaä early in the film but she IS wearing leggings as is clear a bit later on.

3)It's funny that although this movie was not originally made by Disney it was later released by them and Nausicaä is a princess and she DOES have an animal side kick...so that makes her a Disney Princess (per Maui). Somebody inform the people at Disney World to make a place for her in the nightly parade.

Gary Sax replied the topic: #280487 28 Aug 2018 10:01
You going back through these reminds me of how fucking *consistently* good these are. I think the only ones I like less than most people are Princess and Howl's Castle, but that's more of a "not to my taste" than "bad."

Is there *any* creator with a higher hit rate than Miyazaki?

ChristopherMD replied the topic: #280539 28 Aug 2018 17:09
A little side-trivia: There are 2 English dubs for Arrietty as she's voiced by Saoirse Ronan in the UK release and Bridget Mendler in the US.

For reference it was about how Spirited Away was the start of Disney doing A-listers for dubs in the 2000's.

repoman replied the topic: #280562 28 Aug 2018 19:40
I'm finding that out Gary. Previous to Gjiblapalooza I had seen maybe 3 or 4 of his films and now we are on the sixth movie, though Graveyard is not a Miyazaki film. All have been really fun, not counting Graveyard because that ain't fun at all.

Some are better than others but I haven't found one that's a stinker yet. And boy do I love his imaginative worlds. Both Castle in the Sky and Nausicaä have really genius settings.

repoman replied the topic: #280564 28 Aug 2018 19:45
Also, I should emphasize how mind blowingly cool it is when she rides on her glider. There is one scene where she emerges from a storm cloud fleeing from the Tolmekians and she is cruising as fast as she can with the cloud just to her right and then the warship emerges from the cloud behind her. That has got to be one of the most striking visuals I have seen in any animated feature.

I think the secret is that Miyazaki's animation really conveys a sense of speed in a totally believable way. Not like normal action sped up. This also struck me in Princess Mononoke when she and the Lady exchange sword/knife attacks.

trif replied the topic: #280574 28 Aug 2018 21:04
The manga series is epic (I think there are about five volumes and the film takes you up to just before the end of the first volume) which is why I think the end of the film is so perfunctory. It's really worth seeking out (it kind of plays out like a Japanese version of Dune.)

ChristopherMD wrote: mc, I accidentally deleted your post. I'm truly sorry. Its only the 2nd time in site history I've done that.

For reference it was about how Spirited Away was the start of Disney doing A-listers for dubs in the 2000's.

And yes that was the gist.

They weren't wrong. Haven't read a comic this good since maybe The Dark Knight. I have to consciously put it down so it won't be over too soon.

All this talk of Ghibli got me watching this anniversary concert last night. It was really good.