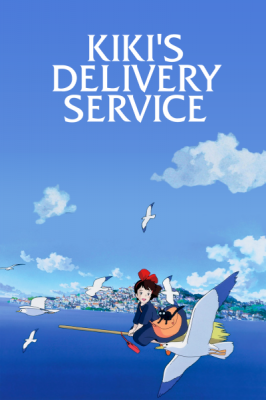 "We fly with our spirit."

Kiki is a young witch of 13 preparing to leave home on her great adventure to live in a strange place for an entire year training to be an adult witch. She must leave her home and her family but she is allowed to take along her best friend, Jiji, who is her black cat familiar. Is it wise to let a 13 year old girl take off into the unknown to live in a strange city? Perhaps not, but it is tradition.

There we have one of the central themes of the movie. Increasing urbanization leading to the loss of traditional ways and attitudes. In the rustic home where Kiki grew up, her mom was the resident witch using her specialized ability in potions to help the locals. Witches and witchery are well known and accepted factors of daily life. It is when Kiki gets to the city that people seem to have a different perspective. Some don't even to know what a witch is and marvel at her ability to fly on a broomstick. Country hospitality is also long gone as she is refused a room at the local hotel because she doesn't have I.D.

Kiki strives to keep her upbeat, positive, and gregarious attitude but after a while she begins to become jaded. Her delivery service has made flying more work than fun, her cat has a new girlfriend and she feels betrayed and abandoned, her own love interest seems to be one of the gang of mean boys and girls. Her innocence is fading and so to does her magic. It is only when she returns to the country, this time to the cabin of an artist friend, and then when she puts her selfish interests aside in order to rescue the boy Tombo that her ability to fly on the broomstick returns.

In other Ghibli stories we have often seen the one great fear of children, abandonment, explored in various ways. In Kiki's Delivery Service we have the opposite. A child's greatest day dream. To suddenly be adult, to be in charge, to no longer have to take orders from parents or teachers. The dream isn't without costs.  Kiki, at 13, must become an adult. She has a job and does the shopping, while Tombo's friends have parties and zoom about town in a Jughead type jalopy. But she is free.

This movie is aimed squarely at children and they will love it. The plot isn't very deep. The conflicts aren't very severe. The ending is up beat and happy. As an adult, I thought it pretty simplistic. Charming but not one of the greatest the studio has made.

1) The setting is some kind of merging of Paris and Tokyo. The time frame is pretty fuzzy too. Sometime in the 50's or 60's I'd guess.

2) The cat, Jiji, is voiced by the great Phil Hartman. Made me remember what a funny man he was. Not necessarily in this movie because the cat while something of comic relief is more of a scold and a cautionary voice than a comedic one.

3) What was Kiki's specialty? Was it simply flying?

This is a kids' movie. Kids enjoy it immensely. Adults... eh.

ChristopherMD replied the topic: #280883 31 Aug 2018 20:05
I think Kiki's and Totoro are Hayao Miyazaki's best pure kids films. There are no villains and I believe everyone the kids meet is nice. Yet there is still suspense, action, and adventure. They're also gorgeous and timeless and at least as good as any classic Walt Disney movie.

As a parent, Kiki always hits me hard. The first 15 minutes of the film, where she leaves home, always bring tears to my eye.

Yes, it's a simple story, but the characters are deep, the emotions relatable, and the situations familiar. In fact, I think the only misstep is the move towards 'move action sequence' at the end, where Kiki needs to save the day.

repoman replied the topic: #281002 03 Sep 2018 10:48
Yah as a parent you can relate to the heart break of letting your grown children go. I get that. But they seem so blase about it. Dad is like "What about our fishing trip?" She says "Sorry" and he's like "Oh ok." I think we, as adults, project those emotions rather than them being inherent in the story. Being aimed at kids, the emotions of the parents aren't really explored.

mc replied the topic: #281018 03 Sep 2018 17:03
In the Japanese version, Jiji doesn't get his voice back. I think that gives the film just a little more weight somehow - there's been some growing up done, and certain things need to be let go to do that. I really like the exploration of depression too. That's a big thing to tackle in a kids movie - and again, coming out of it wounded (if you want to read Jiji that way) is not your typical kids fare. Still obviously largely positive - she's back on her feet at the end - but not perfect.

I don't know. I have a great deal of time for movies where nothing happens. The setting is beautiful to look at as well. This is up there for me.
Read More...