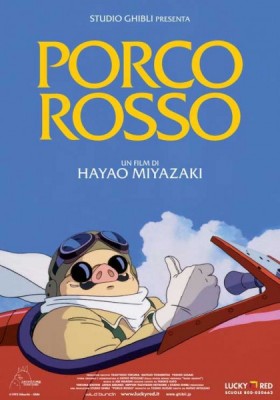 "Farewell to freedom in the Adriatic and to days of wild abandon."

The was once a genre of pulp stories dealing with heroic pilots who would go on adventures to foil the plots of dastardly villains, rescue damsels in distress, right the wrongs, and protect the weak. Comic strips like Smilin' Jack. TV shows like Sky King or Tales of the Golden Monkey. Movies like Sky Captain and the World of Tomorrow. The pilots were brave, dashing, honest and always got the girl.

Porco Rosso, the hero of the story, is one of these with a few notable exceptions. He is self interested, only works for money, likes to drink booze, smoke cigarettes, and womanize. Oh yes, he has been cursed and taken the form of an anthropomorphized pig. Oh sure he's got hands and feet and wears a flight suit and goggles but he also has a snout and floppy ears. Being a pig, he feels no need to adhere to the virtues society expects of its heroes and so pretty much does what he wants and looks after himself. Or so he'd have you believe.

In truth he has a heart of gold.

The movie does take its foundation from those pulp adventures of aerial heroes but it also draws in a lot of film noir elements. Porco is an anti hero along the lines of Rick from Casablanca or Sam Spade from the Maltese Falcon. He has covered up his pain and grief by creating a hard shell to keep out the world. It is better to feel nothing than to feel the pain, they tell themselves. That shell, however, is brittle and all it takes is a flicker of love or hope or honor or all three to crack it open and allow our hero's true nature to shine out. That's where the young girl Fio comes in. She is innocent, brilliant, and beautiful and she sees through Porco's disguise to his true nature and by so doing brings him back to the light.

This movie is a strange one. It is a mix of both childish elements and very adult ones. Of course the hero is a pig and there is much adventure in the skies as both Porco and his enemies the Sky Pirates all fly prop driven sea planes as a means of transport. They live in a fantasy Adriatic sea where a hotel exists on a rock just big enough to hold it. Neutral ground for the resident aviators. There is also a lot of silly slapstick humor. All very kid friendly.

There are darker elements too. It is set in a world where the Fascists control Italy and war is looming. Porco goes to Milan where all the men of military age are missing. We are told they left "to find work" but I suspect they have all been inducted into the army. There are secret police roaming the streets and Porco is a hunted pig. He deserted from the Italian Air Force. He may be a swine but he isn't so low as to work for the Fascists.

Then the darkest moment when he flashes back to his days as a fighter ace in World War 1. He and his squadron get into a deadly dog fight and Porco, then called Marco as he still had his human form, abandoned his friends and thought only of himself, trying to escape. His squadron is shot down to the last man and Porco begins to black out and have a vision of all the pilots, friend and foe alike, joining a great stream of all pilots killed that circles high above the earth. He himself, though, descends towards the sea below. It is here that he takes on the form of a pig so that his exterior should reflect the inner vision he now has of himself. He states that living like a pig is like living in hell.

In the end Porco has a duel with his arch foe, the American pilot Donald Curtis, where neither really beats the other and they become friends of a sort. It is hinted that he recovers his human form but not shown. Nor is it resolved if he ever comes to terms with his love of the club owner and ex fiancee of his war time comrade. This seems to be the way Miyazaki likes to end his films, in a cloud of ambiguity.

Survivor's guilt is not something I thought to encounter in a movie about a pig that flies a plane. I didn't expect it to be as funny in parts as it is. I must admit most of Miyazaki's humor at best is usually only enough to make me smirk but I actually laughed at several points during this movie. I also didn't expect to like it half as much as I did. I'm a fan of action adventure, pulp fiction and film noir. I love self loathing heroes like Porco.

I love this movie.

1) I love Porco's relationship with his plane. Very Han Solo-ish.  The fastest hunk of junk on the Adriatic. Also when he has to have the plane rebuilt he gets rid of the clapped out and antiquated air cooled rotary engine and installs what looks like a Merlin Marine 12 cylinder ass kicker.

2) This is another movie, like Castle in the Sky, where a group of older men fall in love at first sight with the much younger female heroine. These girls are post adolescent but even so there is something creepy about it and it flies directly in the face of the pro feminine characters and themes in his movies.

3) I'd swear there was an Aviation Hero serial from the 30's or 40's with the pilot and his boy and girl side kick. I seem to remember an adventure where they ended up in Hong Kong or some other oriental city. I just couldn't seem to find any reference to it online.