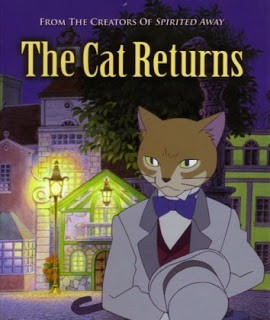 Nearly ten years after the release of Whisper of the Heart, Studio Ghibli released this non-sequel. It doesn't continue the story of Shizuku, the young girl of that movie, but it does feature the cat statuette that inspired her, The Baron.

It's  distinct from the other Studio Ghibli movies we've watched so far. The art feels different from Miyazaki's work. I'm no art expert but the backdrops seemed more impressionistic, if that's the right world. A bit fuzzier. A bit softer. The characters seemed to be drawn with a slightly different style as well. A bit more linear. I'd guess there was a very different team working on this picture than in the earlier projects.

Hiiragi is no less imaginative than Miyazaki when it comes to strange visions. Miyazaki draws much inspiration from older Western folk lore while Hiiragi has taken Alice in Wonderland, mixed in some Mandarin Chinese influences, and Victorian English intrigue in line with The Great Game. It is very trippy and bizarre. It was also surprising and unexpected in many places. It goes from being silly to sinister to goofy to deadly seemingly at random and with little notice.

The central message of believing in oneself is expressly stated on several occasions so it isn't the subtlest of movies in that regard. Once Haru, the teenage protagonist, finds the confidence to do this she is transformed from the disorganized, bashful, clumsy sad sack she is at the beginning to a confident and organized young woman. The final scenes show her in adult clothes, with a new hair cut, and a different way of speaking.

This is definitely in the second tier of Ghibli movies. It's main attraction is that it has a very different feel than Miyazaki's work. It also lacks much of his mastery.

1) One of the most effective yet frightening threats in any story, to me, is the idea of an evil place coming across as enticing  and seductive and luring you to give in. Like Odysseus and the isle of the lotus eaters or the cat kingdom here. The idea just gives me the creepy crawlies.

2) Is there something wrong with me that much of the humor seems to be not so funny? Is it that Japanese humor is different than American humor? Or is something lost in translation? I'm not sure but the zingers seemed lame.

3) I suspect the cat, Moon, was changed from brown as he is in Whisper of the Heart, to white in order to facilitate the Alice in Wonderland connection. Maru doesn't follow a white rabbit down a hole but rather follows a white cat through a labyrinth of alleys to the magical world.

4) 10 years seems a long time to wait to make a quasi-sequel.

5) At what point did movie actors start taking voice over acting seriously? I get the feeling that some of the actors hired by Disney weren't really giving it there all. Elliot Gould here as the crow seems not to have his heart in what he's doing.