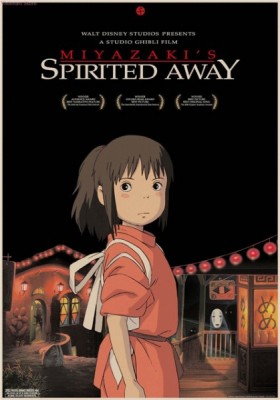 "Play with me or I'll break your arm."

When you think of fairies, providing that you do think of them, what probably comes to mind is a diminutive and nubile female with butterfly wings who spends her time flitting about fields of flowers and singing happy little songs. When Hayao Miyazaki thinks of fairies, he thinks of something very much different, something older, something a bit more sinister. Miyazaki's fairies are of the medieval type. They are at best nasty pranksters who delight in playing tricks upon unsuspecting humans and at worst they are hateful child abductors and casters of curses.

So it is when Chihiro, the girl protagonist, finds herself transported to the land of the fairies she discovers it is not a very nice place. Her parents are turned to pigs. She is directed by what seems to be a teenage boy to find employment at the bath house of the fairies only to become enslaved by the hag, Yubaba, who runs the place. The other residents of the bath house hate and despise her for being human and the frog overseers are cruel and capricious. Only in the spider like creature that runs the boiler and in the head maid does she find any semblance of kindness.

Miyazaki is great at channeling the fears and hopes of children. All children feel confusion when they don't know the rules of society or why things happen the way they do and they certainly feel they have no control over what happens to them. Parents, of course, provide an anchor and sense of security but when the child is removed from that safety it can be terrifying.

Chihiro is tossed about this world at lightening speed, never really given a chance to make sense of it all. It is only when one of her few friends, Haku, is in deadly peril that she begins to exert herself and take control of the situation. It is then that what were once sinister and threatening creatures begin to become friendly. What was once baffling chaos starts becoming understandable. As Chihiro matures and imposes her will upon her surroundings things begin to take on a rational order.

This is widely regarded as one of the best Ghibli films and I can see why. The animation and visuals are absolutely stunning. The animators were really on top of their game here. The parade of bizarre creatures that inhabit the world of the fairies from the three green disembodied heads, to the giant baby, to the blob creature that wears a mask and devours people whole are all straight out of a high powered acid trip. That these things are brought believably to life is another sign of the total mastery of the medium by the creators.

I've stated in a previous episode that I'm not a big fan of Alice in Wonderland from which this movie draws much inspiration. It's surreal nature led me to describe it to a friend as a "brightly colored nightmare". This is not to say that I can't recognize it's greatness and I understand why this is many people's favorite of the Ghibli movies.

I think it's more coherent, with a less surreal narrative, than Alice. Which makes it stronger than that work.

mc replied the topic: #281359 09 Sep 2018 20:47
Someone else will know more than me, but from memory, the "spiriting away" is related very closely to shinto beliefs about how the spirit world interacts with people. Essentially, at the end, Chihiro will have no memory of anything that's happened to her. However, she will have been changed by the experience. When she's looking back through the tunnel, that's the her memory disappearing. But she's feeling better about the move and has learnt a lot even if she doesn't remember.

My favourite bit in this one is the train journey out to the Yubaba's sister. There's something really terrific about it - again, that feeling of a kid being on their own and uncertain in an adult world. Compared to all of the disorientating stuff she's faced up to that point, it seems mundane, but it's like this huge thing that she's doing, catching the train. It's like a next step up from the kids waiting for their dad in Totoro to me somehow. (There's probably a whole film studies thesis in there about the representation of timetabled transport vs the freedom of the skies in Miyazaki films but I digress). And then she meets the sister and starst to learn (once again), how complicated all those relationships are.

Great stuff. Thanks again for doing these!

repoman replied the topic: #281363 09 Sep 2018 21:26
One thing I did notice and think about but didn't really mention in the blog is how mind blowing the animation of Chihiro is. The way she moves and runs. It was so realistic that I'd almost think it was rotoscoped. I know it's not but if you watch it again soon pay attention to the sequence where she's running down the stairs being chased by Faceless and also the sequence near the end when she runs across a grassy field, the strange but authentic way she holds her arms as she runs.

That is one way Ghibli just outclasses Disney. Disney drawn animation has a weird halting aspect to it. You never forget your watching a cartoon with Disney.

I wonder how many hours those Ghibli artists put in doing motion studies.

Black Barney replied the topic: #281388 10 Sep 2018 13:36
yeah the animation is a total labour of love here. The way she taps her feet into her shoes to make them hit the ends is a total rip from his own granddaughter. That kind of care going into it just can't be copied at all. He puts everything into these films. I would love to be a fly on the wall as he explains this to his animators.

By far my favourite film as well. It's terrifying and mesmerizing. I love everything about it. I love how the train trip with NoFace just slowly puts me to sleep too. It's one of the most calming sequences and musical scores I've ever seen in an animated film. (...I just realized I wrote this without seeing mc's post above. That's cool that this very nothing scene stands out to both of us). Also do those dumplings that the parents pigs out on look delicious or what??!

I didn't even realize this was a land of fairies. I thought it was just all spirits.

waddball replied the topic: #281395 10 Sep 2018 14:43
Thanks so much for all these Ghiblapalooza posts. Very nostalgic. I unwisely took my daughter to see Spirited Away when she was too young for it. I just didn't do the research and figured it was more like Totoro and less like Mononoke, and...wow, she was terrified. I still get grief for that (she's in college now).

But yeah, this is a really well-done film top to bottom. All of them are great in their own way, though I do find--as with anime--that there are some plot disconnects and character reactions (sudden joy or rage, etc. where they don't fit) that leave me scratching my head. I assume cultural differences/assumptions.

Frohike replied the topic: #281422 10 Sep 2018 23:17
Spirited Away is probably my favorite of Miyazaki's films. Everyone's already described what makes so many elements of this film work so well.

I see it as the most balanced of Miyazaki's recurring motif of a kid thrown into nearly overwhelming situations and left to find their own footing in whatever way they can.

In the world of Disney, these kids would be blessed by destiny, some innate power, or some other Mary Sue (though I think the term is now mostly abused by #gamergate morons) premise that gives them some innate advantage.

Not so in Miyazaki films. The kids go through an often rough acclimation period, are presented with strange rules & restrictions to follow, employment contracts or agreements, and areas of social ambiguity that they are expected to navigate correctly... and they often don't. The kids are fallible, scared, make poor choices or stumble into them, and pine for solace with parents who are usually busy with their own problems (illness, pissing off gods, single parenthood + employment, etc). They don't often find some secret formula to get out of their situation, but do find their way through their wonderland maze with empathy, a developing work ethic, and the ability to observe & pick up on details that adults would normally tune out. Their armor that gets them through the gauntlet is mostly a confused resistance to dogma, be it unintentional through unfamiliarity, their willful idiosyncratic interpretation of it, or empathy punching its way through the layers of confusion & fog.

I think Spirited Away is unique in the way that it injects quasi-insane or magical kid logic into almost every part of this process with god/fairie rules that feel as nostalgic as they are unnerving e.g. holding your breath on a bridge, lugging a small piece of coal that seemingly weighs 50 lbs., forgetting your "real" name in favor of your assigned one (something familiar to those who go almost exclusively by their nickname), forcing a giant dragon dog to take his medicine, etc. While it takes the child actors and places them into situations that emulate the disorientation of coming of age, it also throws adult viewers into the blender with an uncanny Shinto setting mixed with nostalgia.

These themes & dynamics hold a special place in our home. The kids started watching these in their early years but I think some of these films where parents leave the picture and return have become more poignant for us after my wife's breast cancer survival a few years ago. Both kids have been transformed in the process and I think they often see a lot of themselves in these films.

My son recently chose to include Hisaishi's "One Summer's Day" in his piano reportoire & hearing him play the first few notes immediately makes me cry. He'd been working on the piece surreptitiously for awhile, and I would overhear snippets occasionally & figured he was just noodling around with it in the same way he does with Skyrim music or whatever. But on Father's Day this year, he suddenly started playing the entire thing while I was hanging out in the living room and I just sat down and made a point of framing this moment in my memory. He knew the significance of what he was doing, and I thanked him for it when he was finished playing.