Ghiblapalooza Episode 11 - My Neighbors the Yamadas 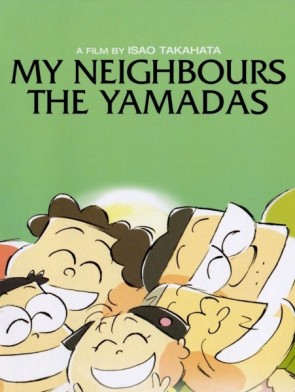 My Neighbors the Yamadas

Humor is not necessarily universal. All people do find certain things funny but those things vary a great deal from one culture to the next. My biggest disconnect in any of the movies I've seen so far is the humor. I suspect that if I had grown up in Japan I would be laughing a whole lot at the jokes. However I grew up in a dead mill town in New England so much of the hilarity eludes me. When Studio Ghibli makes an hour and a half feature that is basically a sitcom about a middle class Japanese family, I am more baffled than amused.

There are some good things that I can appreciate about it though. In it's depiction of family life, it offers a good window into that other culture. The way the family spends time together at home or out at the mall is somewhat insightful. The layout of a Japanese home and the way they sit at the table or watch TV also have some mild interest.

The animation style is very different from the other films and purposefully so. It is crude in the way a child would doodle. However, the background animations are actually quite fun to look at. People coming in and out of stores, the rain falling, or, my favorite, a small gang of hooligans riding motorcycles and scooters.

This movie is far removed from anything else I've seen by Studio Ghibli. It took willpower and endurance to make it to the end.

Frohike replied the topic: #281880 19 Sep 2018 02:11
I love the use of Bashō haikus in this movie. Also... best Ghibli grandma, hands down. This and Summer Wars (not Ghibli, but some similar family humor) seem to be fairly faithful to Japanese middle class family dynamics, at least from what I've seen in a couple of the nuclear families that I've become a part of in the US.

I also enjoyed that stark moment when the Dad confronts the biker gang and the art style shifts into something a bit more realistic, then gets back into caricature while Grandma defuses the situation. And again Bashō when it's over:

"How cruel
A grasshopper trapped
Under a warrior's helmet"

while Dad sits on a swing set with his neighborhood watch/fire drill helmet on the ground, sadly fantasizing about kicking ass as a superhero. Just perfect.
Read More...