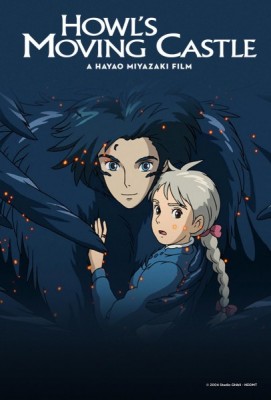 There Will Be Games
"Well, the nice thing about being old is you've got nothing much to lose."

I've been having a hard time thinking of what to say about Howl's Moving Castle. It's a difficult movie.

Superficially, it's not hard to describe. It's a fantasy tale set in a Victorian age land where two nations are about to go to war over the suspicious disappearance of the prince of one of the kingdoms. Sofi, a worker in a local hat shop, is cursed by an evil witch and is turned into an old woman. Sofi flees into "the wastelands" and takes up service in the castle of a wizard named Howl. Eventually falling in love with the wizard and through the opening of her heart to him and he to her each breaks the other's curse.

The difficulty is when I attempt to put together my thoughts on what the movie was really all about.

As in many of Miyazaki's movies, the anti-war message is pretty strong. However, how it fits into the film is strange. Howl resists the demands by the rulers of the kingdoms that he should take part in the war using his magic to further their ends and yet he often ventures forth into the war torn areas to do...something? It's not clear. He flies around as a bird like creature and is pursued by those wizards who have joined the fight but why is he there? Perhaps he is merely observing? The resolution of the conflict is equally puzzling as it is dismissed with a deus ex machina style device in the closing minutes of the film.

There is also the love story between Sofi and Howl. Sofi, as an old woman, at first takes on the role of a mother to Howl and his two companions; a young apprentice and a demon spirit. She cleans and cooks for them and maintains the moveable castle of the wizard. Howl, while a powerful wizard, is clearly still a child emotionally. He is vain and petulant and in one dream like sequence when Sofi ventures into his sanctum sanctorum the way is lined with all manor of child's toys. The transformation of this mother/son relationship into one of two lovers makes a sort of sense if we assume that Howl knows Sofi's true nature the whole time and is not fooled by the curse. It is not so clear what she sees in him other than that he has "a good heart and only wants to be free." It's a bit of a stretch and I found that I could not buy into in entirely.

The theme of redemption runs throughout the movie but again these transformations seemed forced and labored. Howl goes from childlike coward to self sacrificing lover, the Witch of the Waste goes from villain to lovable grandma and Sofi goes from jaded to a rejuvenated woman empowered by love. The worst, and I can only attribute it's crudeness to lack of time to explore it more fully in the movie, is the transformation of Turnip Head, the scarecrow, into the missing prince via the kiss of Sofi who is his "one true love". Say what?

The animation is, of course, magnificent. I feel like I say this quite a bit but visually the movie is one of the best animated features that I have ever seen. It's the story I have a problem with.
There Will Be Games

Frohike replied the topic: #283152 16 Oct 2018 13:54
This movie has always been a whimsical train wreck for me. I initially assumed it was his last since it indicated a weird loss of perspective and economy in his work, though he mostly recovered with Ponyo. Even that last film feels like a shadow of his previous work, though. I wasn't very surprised when he eventually announced his retirement and I still have misgivings about his surprise "return."

It's been a little while, but reading the book this is based on i seem to remember answers some of the questions. Which doesn't excuse the film - although I must say I always enjoy films where everything is not explained. Where does Howl go? Well, in the book it turns out he also lives as a teenage boy. In Wales. Yeah.
Read More...