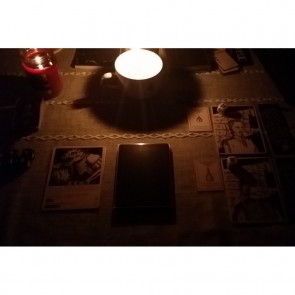 Game Name
Escape the Dark Castle
There Will Be Games

Some thoughts and opinions on Escape the Dark Castle.

Escape the Dark Castle will not appeal to everyone and possibly even most people. There is no puzzle to solve or points to acquire. Choosing when to rest and when to fight is probably the most important decision you make. You aren't big heroes and all of the loot is garbage. Even the story it tells is disjointed. It's like flipping through a Fighting Fantasy book for the pictures and just playing the text that goes with them. The game also wants to kill you.

It will appeal to people who like clean straight-forward designs. That applies to both the mechanics and the aesthetics. I did a solo run when I first received the game and haven't touched the rulebook since. You typically roll a single die per character and hope for the best. This fits with the theme and setting of the game where you are soul-crushed, weak prisoners with nothing but the rags they wear. However, various items will let you manipulate your rolls and you get items reasonably often in my experience thus far. I've heard this game compared to DungeonQuest and I can see that even if I disagree with it. Escape the Dark Castle is hard but you won't die on the first turn or get stuck in the catacombs half the game. In fact, you make progress every turn by not dying. That's really what the gameplay boils down to and all you have to do to win. Not get killed for as long as possible in the hope you'll reach the final chapter for a chance to escape (and win).

The black-and-white art direction is really the only choice for this game. Its clearly, and written in the rulebook, supposed to remind you of the printed gamebooks of yore. The large cards being the pages and the small cards representing your notes. Even the pencil and paper for tracking health fits with this idea. Tip: Draw 18 point life trackers on four of those pieces of paper, grab four small stones to move on them, then never have to use the pencils again. The art itself is a combination of old-school fantasy drawings and medieval etchings which I happen to like. If you don't have an imagination or hate game artwork that's not modern then you'll probably find it too simple and unattractive. Obviously as this is an “atmospheric” game if you don't like looking at it you aren't going to enjoy the atmosphere so best move on.

The game is very quick both in setup and play. So much so that I've found myself playing occasionally while I wait for my dinner to finish cooking. I've played solo and two-player so can't speak to higher player counts yet. It takes several bad rolls to ultimately kill you and there is quite a bit of variety in the challenges the chapter cards can hit you with. So regardless of the limited card pool and expansions I don't see two plays ever feeling the same. I would jump on any future expansions for this anyways. I missed the sci-fi version called Escape the Dark Sector on Kickstarter. At first I was apprehensive about whether this could work in a sci-fi setting or whether the games are too similar to be worth owning both. Now having played EtDC a bunch of times and still wanting more, I patiently wait for the retail release. Give me more.

For the atmospheric part, the other night there was a power outage in my neighborhood. Tree fell on a line and would certainly be fixed by the next day. So I go through my checklist before night comes. Candles? Yes. Flashlights? Yes. Food because I have an electric oven? Yes. Phone charged? Halfway. Okay, I was confident I would survive the night. I don't like staring at my phone screen so decided a board or card game by candlelight could be a good way to entertain myself. Fast forward a few hours and I've got a couple candles on my kitchen table and have set up Escape the Dark Castle. Using a slightly different layout than the rulebook suggests in order to keep everything within the precious little light I got in a couple plays. This game was practically made to be played by candlelight. The drawings of monsters and hallways drew my attention like they hadn't before. All of the text was readable and even the giant dice suddenly made sense as there was no trouble seeing the faces. Playing it this way was absolutely as atmospheric as a board game can be. The only thing that could bring the setting out more would be eating a partially rotten apple after not showering for five years. I now wonder if they playtested this game in the dark. I wouldn't be surprised.

Frohike replied the topic: #302058 27 Sep 2019 22:13
In the current design climate where every game gives you dozens of levers to pull and knobs to twiddle on your way to a victory point tally, this one seems to give you a single lever: dread. And it pairs this with atmosphere that you can cut with a knife. Hell, I don't own the game and I feel it from just looking at the art design.

And I really dig that.

I've gone all-in on Dark Sector but this has convinced me that I really should try out its predecessor, because I do enjoy this style & setting quite a lot.

HiveGod wrote: This is a game for people who like to play rather than solve.

I very much play games in order to play rather than solve, and the same goes for my kids (7 and 10) whom I played this with. There is a lot to like - especially the art work and the size of the cards that gives it room to shine - but we ended up selling it pretty quickly.

first of all it's obvious that the game doesn't hold that much game. You rarely (if ever) make decisions that will impact neither the outcome of the game nor the flow of the story. Which can be fine - the combat system works pretty well and make the encounters feel more different that rolling towards a target number or some such would. But the real issue is that to us the game didn't make us feel the dread, the hopelessness or anything else much. Because in the end all encounters pretty much do the same thing: whittle away at your life points. So it's not until the end that you feel that stuff depends on your choice of who goes first or on the roll of the dice.

As I've said elsewhere I'm not trying to take anything from people who enjoy it. But this stuff about how you hate imagination or only play dry Euros unless you love this game is plain garbage.

And finally: I do appreciate the review and I especially like the notion of the game not having important decisions precisely because you are not important people. But personally I would have liked the game to feel more dangerous. Or to have the story be more important than it ends up being.

HiveGod replied the topic: #302071 29 Sep 2019 15:49
Fair enough. We approach this way more like an RPG than a board game, and much of what happens revolves around accusations of exactly why you were imprisoned on the Dark Castle to begin with, and the vehement denials and counter-accusations:

"If we're gonna get out of here alive it would be better if you really were the reason all those kids are missing... rather than just a simple tanner."

So we pretty much just argue a bunch and then fight while snot-crying and then go back to arguing.

Frohike replied the topic: #302075 29 Sep 2019 23:00
Reading this again along with mads b.'s take makes me wish that Ignacy had considered this style of setting for the Robinson Crusoe sequel, rather than the boring Martian... thing he made. Or a haunted mansion in the vein of Steve Jackson's House of Hell. His basic model of action placement, delayed consequences, and those dreaded dice would be amazing in any of these settings. I'm always averting my eyes & taking a breath when flipping an event/adventure card or rolling the dice, knowing that I've done whatever I could in some self-deluding hope that I've "prepared" sufficiently, something that probably feels very similar in Escape The Dark Castle.
Read More...