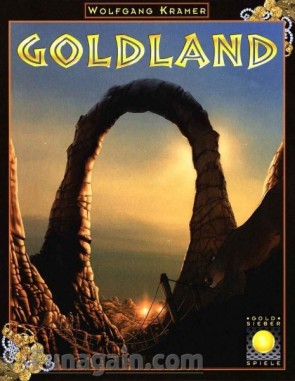 Game Name
Goldland
Designer
Wolfgang Kramer
There Will Be Games

I'm a fan of american style adventure games like the classic Magic Realm which inspired the simpler Return of the Heroes and some games from Fantasy Flight like Arkham Horror or even Runebound.

These games usually have in common certain characteristics like: long playing time, lots of dice rolling, medium to complex rule sets and lots of theme and chrome.

Goldland on the other hand is a euro game, low on randomness (the only random element is the exploration), short on playing time and with very simple rules, but it manages to capture, in its own simple way, the theme of adventure and exploration.

Some of the adventure games I mentioned above (and many I didn't) are also race games, where players race to be the first to accomplish some goal like kill a powerful enemy or get some valuable treasure. In Goldland, players also race to reach the hidden temple to get an amulet and gold.

But Goldland's game play it's much more abstracted, and its mechanics have been trimmed down to their essentials. First, the exploration mechanic is a simple tile layering action where a random tile is placed on the spot the player wants to explore. Simple but effective, and it manages to convey the feeling of discovering the unknown.

Then the movement mechanic, true to the theme, reduces the amount of movement points a player has as their backpack becomes fuller. This is a very simple but effective abstraction of movement in the wilderness, and works perfectly well as a game mechanic too, as players have to plan well what to take and many times have to abandon some possessions in order to reach a specific spot in time.

And last: the Adventures. Your typical adventure encounter in other, more complex games, here becomes a puzzle like experience where each type of adventure needs a different set of resources. Once those resources are spent, the player places a tent marker on the tile and from then on may freely pass through that spot.

The adventure tiles are mixed in with the regular tiles, so that when exploring you may uncover an adventure tile. Unless you can spend the required resources you won't be able to step on that tile, effectively blocking your path until you either get those resources or choose an alternative path.

So, on their way to the temple, players will face multiple adventures and they will have to plan and prepare themselves for those adventures. Sometimes they will have to go back to the towns at the beginning of the board to get more resources, but clever players will try to use as many of those resources that can be found on many of the regular tiles (and even on some adventure tiles once they're solved). Also, a clever little mechanic that would be the equivalent to "experience points" in other adventure games, allows players to come up with improvised resources of any type by spending "exploration tokens" that are gained each time a tile is placed on the board.

Add to that the fact that each tile has three exits (and one blocked path) so that players will attempt to place the tiles in a way that makes it easier for them to get to the temple while at the same time trying to block the path for the other players (in order to go through a blocked path, lots of resources must be spent, so it's not always a good idea).

In the end, and as this is a eurogame, players will score based on how much gold they got. The player that solved more adventures of each type will get a certain amount of gold (ties go to the player that got them first). Also, on the way to the temple, there are adventures that also have treasures that players may get by spending extra food resources. Once in the temple, the amulet is also worth some gold, and the first player that arrives (along with all the players that arrive in the same game round) will get some bonus gold.

So, as there are many ways of getting gold, there are also different strategies that can be used to win, although usually you want to get to the temple as early as possible as that's the main goal of the game. It's funny, because in a way, the scoring system is a bit like the one on Magic Realm (but without the planning ahead), where players get rated in several areas of gameplay to get an overall score. This system, as I said, allows for different paths to victory.

Overall, I think this is an exciting little game that thanks to it having no text at all in its components, I can play with my 4yo son, which really enjoys it and can understand it perfectly (complex american type adventure games usually have a lot of text and require reading skills). It's also a short game that has enough going on that it doesn't feel like a light filler, and I love the way the theme is integrated (if abstracted) in the rules and mechanics. It really gives the feeling of exploration with its own difficulties and rewards, and has lots of tension in the race.

I also usually dislike race adventure games because after all the effort (and big length of play), in the end, the first player to reach the goal just wins and all the effort seems worthless, but here, as the first player won't necessarily be the winner, there is room for more strategies and options that in the end may be more important, so you always feel like you've got something to do.

This game is OOP, and it seems to be quite hard to get nowadays. I can only hope that it will eventually get a much deserved international printing so that more people get the chance to play and enjoy this odd and wonderful "euro adventure game with a real theme"