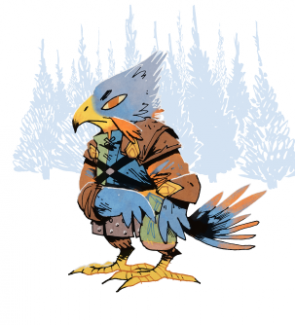 If this sounds delightfully weird to you, you might just want to play the Eyrie Dynasty in Root, henceforth known as “the Birds.”  One dear friend of mine compares playing the Birds to jumping out of a plane and spending the rest of the game trying to find the ripcord to your parachute.  But the fun part is you don’t really need to stick the landing- just get to 30 points, somehow.

Unlike most other factions that use the cards primarily to craft, cards are used to fill up your decree, which is a programmed set of actions you must take every turn, which gets bigger and more unwieldy every turn.  Bird suited cards are 'wild' and therefore flexible, which will allow you to take the prescribed action anywhere, while the other suits’ cards must be done in their respective clearing type.  If at any point you can’t fulfill your program, you go into turmoil and lose points, as well as your burgeoning decree and current leader.

The leader you select will determine your first two cards in your decree, and after that you set up your decree with 1-2 new cards each turn. After a brief opportunity to craft any cards with your existing Roosts, you proceed to do the fun things.

First up is Recruit.  It can be tempting to place your suited cards here.  But beware an aggressive opponent who will crush your roosts and make you go into turmoil that way.  After the first few rounds, I recommend leaving at least 3 warriors (or have 2+ matching roosts) of any clearing matching a suit that you have in the recruit order.  Also keep in mind that you can go into turmoil if you run out of warriors to recruit with.  If you find your stock running low on warriors (too many on the map), add more cards to Battle.

Second is Move.  Simply move one or more warriors from a matching clearing to an adjacent clearing.  Keep in mind the movement rules – you must rule the clearing that you’re either moving from or going to, if not both.  In practice, this means making a huge death ball of birds and running a blazing trail across the map much of the time.  Move is the safest place to put your cards – it’s very hard to go into turmoil from being unable to execute a move.

Next up is Battle.  It can be very dangerous to put anything but a bird card here if you’re inexperienced or you don’t have many opponents’ warriors and tokens around.  If people move out of the listed clearings or you manage to destroy everything there, you’re stuck. Late game this advice goes out the window and you can gladly toss two cards down here to try to rack up points for destroying buildings.  Otherwise, I’d keep the number of cards in here to a minimum for much of the game (1-2 bird cards).  As mentioned earlier, you lose warriors from your own battles, so this can be one way to avoid turmoil from over-recruiting.  Too many battles and you’ll find yourself without enough warriors to defend your assets.

Lastly is Build.  If you rule the clearing and don’t have a roost there yet, plop down a roost. The bulk of your points as the birds come at the end of your turn based on how many roosts you control.  Much like Battle, it can be very risky to put anything but a bird card here, unless you plan to go into turmoil.  (Doing otherwise is a bit of an advanced move. I had a two-player game v. the Marquise once where I didn’t draw a bird until my 4th turn.  I placed a Fox in build on turn 2 and was up to 4 roosts at the start of my 5th turn.  My opponent piled a huge amount of warriors on the last fox clearing, knowing that if I couldn’t take it I’d go into turmoil.  Instead I placed two other cards in build and managed to get up to 6 roosts before the inevitable turmoil, (remembering that you fulfill as much of your decree as you can before going into turmoil).  Remember that you don’t need to remove all enemy warriors to place a roost, you just need to rule the clearing.  Battling into an ambush when you’re tied 2-2 warriors is an easily avoidable novice mistake.

Even though you get fewer points for crafting as the Eyrie, don’t forget about crafting! It is common for new Bird players to focus on the suits of their cards and ignore the text.  Many of the cards that don’t score points are very useful for the Birds, and of the ones that do score points, the ones that score 1 point (Boots, crossbow, and bags) are just as good for you as anyone else.  If you get some good ones in your opening hand, you may consider going with the Builder, who scores full points for crafting.   Keep an eye out for Royal Claim, a bird card which doesn’t score at the time of crafting, but rather when it is discarded from play for points- this is useful with any leader.

Which brings me to the other leaders.  The tutorial game recommends the Despot, which comes with viziers (locked-in bird actions) in move and build, and this is a good suggestion.  However, he’s also paired with a slightly more late-game special power – getting more points for destroying buildings or tokens- this can be good early against the Woodland Alliance though.  The other good early-game leader is the Charismatic- they double the effectiveness of your recruit actions, which means just two cards in recruit gives you 4 warriors per turn.  It is dangerous to put more than that though, because of turmoil for overrecruiting.  If you are unable to move out of your starting clearing as the Charismatic, you’ll be unable to fulfill your decree on your first turn, so be careful when picking this leader and be sure to look at your starting hand. Last up is the Commander, who scores an extra hit when attacking.  This is kind of a late-game leader for dealing with large swathes of enemies, or perhaps putting the hurt on a well-defended Woodland Alliance player.

Since two out of the four leaders come with a bird card in battle, and you might slip a card or two in there on your own, you’re often the most aggressive player at the table, which would normally cause you to catch a lot of heat.  Luckily you have the ability to fall back on your decree when it comes to table talk.  “Nothing personal.  I had to battle/build in a fox clearing and you’re in the least defended one…”  This is why I compared them in my opening to a wandering monster or a force of nature.  The birds just kind of do their own thing, often somewhat out of your control.

An Eyrie player who manages to go the whole game without going into turmoil can perform so many actions that they’re truly a terror to face off against, and people will then try to bring you down.  If being in the center of the action while laughing on the precipice of madness (and the off chance that you might fall and fail horribly) while solving some tricky movement and attacking puzzles appeals to you, the Eyrie might just be for you.

OhBollox replied the topic: #311651 03 Jul 2020 16:28
They're too much of a tightrope run for me to enjoy playing them, but it's always fun watching someone sweat bullets as they program the decree. Avoiding turmoil completely often ties you in knots, but a nice early turmoil when there's little damage done, and a switch of focus in your new decree can be a really good move.

Gary Sax replied the topic: #311652 03 Jul 2020 16:30
Yeah, I recognize they are quite powerful and takes a high skill level to play but I just don't enjoy playing them. It's a stressful puzzle rather than a fun one for me. I'm also an inherently conservative game player (why I like the moles) and the Eyrie absolutely rewards pure aggression and stretching your lines.

"We need someone (or two people) to play a board presence faction."
"If no one wants birds I'll take 'em."

I really enjoy the puzzle, despite my dismal first showing. I don't know if anyone else remembers my first post from a Root game, but I lost something like 30-1 in a 2p game because I went into turmoil nearly every other turn. Constructing a robust decree is something I like, and I think you can definitely win if you go into turmoil just once in a game, so sometimes you shouldn't fear it too much if you're actively improving your board presence along the way. Every now and then I'll try to play a double-build decree game, and that really forces you to get out there. You're almost guaranteeing that you'll go into turmoil even if no one messes with you by turn 4, but establishing your infrastructure like that is huge.

Jackwraith replied the topic: #311683 04 Jul 2020 15:13
I think the Eyrie suits long-term planners in games, but it certainly helps to be experienced with them. This is an old saw for Root by now, since many of us have expressed the feeling that the game works best when all of the players have experience both with their own faction and others, which is a significant time/attention demand. While I don't enjoy the Eyrie as much as I do other factions, I think there's enough room in their design to not have to feel locked in. In my experience, it just takes some anticipation of opponents' moves to not corner yourself. But not everyone enjoys playing that way.

All of that said, Jexik is really, really good at it.

I'd like to get back in the swing of writing again, and I'm looking to do the Vagabond next. I think it'd be kind of silly to get exhaustive and talk about each different Vagabond character card, but I do have a general angle for how I want to approach it.

Corvids and Moles will likely be awhile as I've not acquired a physical copy (was looking to get it from the FLGS in March, haha), and have yet to even play as either one in Tabletop Simulator yet, although I have played against them.

mc replied the topic: #311688 04 Jul 2020 23:46
It's been a long time since I played any Root but I remember enjoying the Birds, even as a beginner. More than anything I liked that kind of thematic distillation of an establishment ruled by tradition,

Jexik replied the topic: #311715 06 Jul 2020 13:43
I like that about the Eyrie too, and how it's just one way that one faction interacts with that same communal deck. It's cool that other factions like the Woodland Alliance and Lizard Cult care about their cards a lot too, but for different reasons.
Read More...