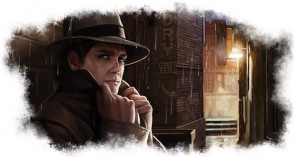 “Thanks for coming to see me, Roland. It's nice to see the face of a friend. I fear that despite my credentials, the psychiatric staff here aren't very tolerant when it comes to my rants.”

“Rants? Why are you ranting?”

“I guess I should start at the point where we first parted company. We left the University together. I was heading to the woods to hunt for clues, and you were going to explore the Black Cave.

“Once I reached the outskirts of the woods, it only took a few moments of searching before I found an obvious one. There was a tremendous amout of crushed foliage, and it transformed into a path that lurched back-and-forth, deeper into the forest. With some small bit of trepidation, I followed it. I knew that there must be danger associated with this progress, but felt that I could also find the clues that would shed some light on our current endevour.

“As I progressed, I was beginning to hear the unmistakable sounds of some large branches being snapped, along with... other noises.

“Eventually I crept closer. Whatever was before me must have been truly enormous. I could feel whatever was stomping around up there in the soles of my feet. It was akin to visiting the elephants at a zoo. If you've ever been in the presence of one or more of them running... well, the strengths of their footfalls are so titanic, one feels as if one is getting pushed up into the air when they are nearby. You can be assured that it caused me to proceed with much more caution.

“What I soon encountered froze me solid.

“The monstrosity (for a monster it was) was down in a little hollow, creating quite a havoc. I don't know if it was futilely seeking something or if it was just disoriented and angry. The top part of it's enormous body split into numerous thick tendrils, which were whipping around, breaking branches away from their parent trees. The tendrils extruded from the top of a giant, pear-shaped trunk. Three large elephantine legs connected to its base, and these feet stomped around, crushing the undergrowth. With some awe, I realized that the creature was tri-symmetrical. Unlike the bilateral symmetry that we vertebrae possess, this creature's three evenly-spaced legs continued up into its large cylindrical trunk, where they were separated by three large, fanged mouths,

“I confess that I was petrified with fear. Hot pinpricks of adrenaline coursed up and down my limbs, causing them to shake without an outlet to disperse this vitality. I crouched low, hoping to be beneath its notice, but I feared that it sensed my presence.

“There are many apex predators on this world of ours, Roland. Our Creator has endowed them all with a set of pre-ordained behaviors, so that all their actions can be explained by fear or hunger or the need to reproduce. Knowledge of these behaviors can allow a wise or trained man to survive most encounters with these dangerous creatures. One need only know how they will act and then react accordingly. But this... this thing was not made from our God. It was alien, and I can feel that it hated me. I could find no eyes on its bloated form, but somehow it knew I was near, and it craved my destruction. There would be no reasoning with it or tricking it, for I could tell that it was motivated by no earthly impulses.

“My shaking was surely going to lead to my doom, but I was saved by one of our world's lesser creatures. A hare must have been concealed nearby me, and its will gave out a fraction before my own. Overcome by terror, it broke from its hiding place and bolted away. It's fear must have overridden it's good sense, because it ran past the terrible beast in an effort to plunge deeper into the woods. That got the creature's notice. It trundled after the poor animal and grasped it in one of its whip-like tendrils and fed it into one of its slitted mouths, where it was messily devoured.

“I took advantage of the poor thing's sacrifice and fled as fast as my poor legs could carry me. I ran all the way back to Arkham, imagining that the dark beast was persuing me the whole time. It wasn't until I ran into a newsboy in the uptown streets that I even dared to look behind me. I suspect that I was screaming throughout my entire flight. When the lad grabbed my coat to avoid being bowled over, I found that my mouth was still agape and so raw that I could not vocalize even the merest of apologies. He led me to an older man who brought me to this place, and here I lay.

“Mr. Banks, I fear that my time with you is done. I gaze out these barred windows, and I cannot imagine myself going outside again. I cannot fathom the idea of venturing into an area where these abominations might dwell. I intend to stay here, where it's safe, for the foreseeable future. Though I do appreciate you coming to see me.”

“Look, Doc, I have to confess that I have an ulterior motive.”

Roland opens the bedside table and removes a small stack of money from Doctor Lee's wallet.

“I need five bucks. I'm going to try to acquire an elder sign and that's about how much they cost.”

Roland pats Doctor Lee on the shoulder as he grabs his hat and exits the room.

Turning he says, “And another thing. You can't stick around here all day, feeling sorry for yourself. We need you out there, gathering more clue tokens so we can seal a gate. Just don't end your turns on the street and you should be fine.”

The King in Yellow replied the topic: #311926 11 Jul 2020 18:54
The main reason I have always loved Ameritrash is the fact that one single turn can create a story like this one. It only takes a little imagination to flesh out the details.

Just a little example of some writing I was doing to pass the time during Covid.

Gary Sax replied the topic: #311929 11 Jul 2020 18:58
Nice! I rarely play it but this game still creates those moments for my spouse and I. It's why i still think it's the best adventure game even after agreeing with and internalizing most other people's criticisms.

CaptainOfOuterSpace replied the topic: #311935 11 Jul 2020 22:48
I created an account just to keep this article saved. What a vivid interpretation of the game with phenomenal storytelling. Also, your brother is pretty awesome.

This is just great. You nailed it. Put a huge smile on my face. Laughed out loud at the end. Thank you.