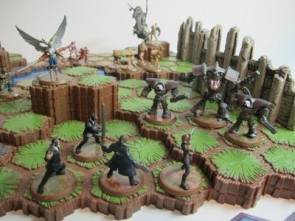 Game Name
Heroscape
Publisher
Hasbro
Designer
There Will Be Games

Everyone should own a Deathwalker 9000.  They're kind of slow and can be a bit clumsy, but they're great for home protection and pretty doggone handy to have around for heavy lifting tasks.  The real problem is that they're a bit soft and squishy on the inside and the service plan isn't the greatest.  The trick is this -- keep them in a high, safe place away from salt water. I named mine "Howard"

Last night my boys took their new Heroscape army designs onto a very stringy Heroscape layout -- long with lots of tight squeezes and a few tall spots -- and placed them confidently on each end of the board facing each other.  They had spent some time thinking out what they wanted to do, and Sean had focused on a vast group of small characters while Riley picked two heavy hitters, Mimring the dragon and Tor Kul Na (I think that's his name) which is this huge bloody looking skin guy with a little skin guy sitting on top of his shoulders.  We call them Master Blaster most days.

Not wanting to leave me out of the fight, they offered to have me set up an army in the center of the board, right between the two of them.  They tried to look sincere as they waited to see if I'd fall for it, and for the most part they pulled it off even as I explained to them just how concerned I was about the positioning.  Every man for himself is all relative when you're the one in between two hammers.  But since Sean had put a seven-piece-high tower of hexes just about in the center of the board I figured I'd give it a whirl.

I decided it was time to pull out Howard and up he went onto the tall hill in the middle.  I set Raelin the Kyrie Warrior down next to him for two reasons, first she's majorly hot in that outfit and second she would give Howard one more defense die.  Howard starts with nine, which is a huge amount in the game.  The high ground I was claiming would make it ten, and then Raelin's effect on Howard's morale (apparently he has morale circuitry -- not a design decision I would necessarily make in a heavily-armed 17,500 pound chunk of bomb-throwing steel and hydraulics, but I'm no bot engineer) would kick that already sky-high number of dice up to eleven.  I would need two hands when someone attacked this thing, and I was looking forward to that.  Raelin's no slouch, but she'd sit back until things started to get rough.  Her real skill early would be in the extra die roll just in case.

That's all I took.  Two warriors.  As the mass of my two boys' armies charged towards my tower I let Howard open up with his extended range, three attacks each turn.  He lobbed bombs into Sean's army of midgets.  He used the 30mm cannon against the big lizard and skin guys.  He essentially held court as all around him fell into chaos and death, and oh how the death came.  Nakita Agents shooting with three measly dice were no match for my eleven die defense roll tsunami.  Mimring closed the distance as fast as he could but Howard stared him down and kept firing.  At first it was attack left, spin, then attack right in measured succession, but as Howard spun away from Mimring on turn three he noticed that the great wyrm stumbled as he stepped, and Howard turned back to plunk one final shot into the mighty beast.  Fire burst from Mim's lips, but the Bot of Steel just used it to pre-light his bomb fuses for the next turn.  Raelin checked her nails and smiled at Howard in a reassuring sort of way.

But Sean's horde continued to march through its losses, reaching the edge of the tall mound, piling one on top of each other as each prepared to scale the rise.  Howard's morale circuitry, sensing the danger, began claiming CPU cycles en mass and he lobbed a bomb down into the center of them in an attempt to hold back the fray.  But Tor Kul Na was breathing down his neck behind him -- there was work to do on both sides.  Raelin snapped the lid shut on her compact, produced a smile for the metal beast above her and said, "ease up Howie, I got this."

Stepping off the edge of her high perch, the Kyrie Warrior had no interest in flying.  This was at best a controlled fall straight into the heart of the mob, as much for dramatic effect as any real tactical advantage.  As she hit the earth she spun her long blade in one smooth movement, deftly cutting away four of the six opponents around her.  The mass of enemies pressed in on her but she swung again, bringing her total to seven and finishing the move gracefully on one knee, both braids falling over her right shoulder and down onto her breast.  Her lipstick matched the bloody edge of her blade.  She held the pose for a moment, staring boldly into the eyes of the Men in Black before her, perfectly motionless save for the breech cloth slowly sliding down off her thigh.

Howard's morale circuits settled a bit as his back-up camera took in Raelin's display, but Master Blaster was in front of him now, in his face, eye to eye in spite of the hilltop.  This guy was huge and Mimring had used up much of the Deathwalker's ammunition.  At such close range Howard went with the cannon for safety, pumping round after round into the blood-skinned Marro in front of him.  Tor Kul Na's blade was no match for his steel armor, and the cannon was taking its toll  Finally in frustration the Monstrous Marro rushed headlong into the bot, slamming against him with all his weight and driving Howard perilously close to the precipice that awaited at the edge of the hilltop -- saltwater marsh below.

Raelin's attack had been ruthlessly effective and oh so quick.  But in spite of the wide path she had cut she had to contend with a far more dangerous opponent.  As two of the Men in Black stood staring at the Kyrie Warrior's deadly-but-majorly-hot attack posture, the third, the woman, was having none of it.  Curious?   Sure.  But she knew just how deadly her enemy could be and recognized the risk to her teammates.  She acted quickly.  Drawing her longnose to tighten the range a bit, she squeezed off three shots, tagging both of Raelin's braids and her right wrist as well, driving the weapon out of her hand.  Raelin stumbled back from the blow and prepared to take flight, but it was too late.  The other MiB agents snapped to their senses and reengaged, quickly closing the door on any path she could use as an escape.

As she fell, Raelin sang out to the metal bot above her, hoping that he would jump down to her aid, and hoping that he would land just a bit to the right of her instead of directly on top.  But Howard was in no position to help, as his LFSU* struggled to adjust to the less-than-solid ground at the edge of the cliff.  He teetered at that edge for just a moment, right foot bearing all his weight.  He dared not fire for fear the recoil would send him over the edge.  Tor Kul Na sensed his chance and and reversed his spear, driving the blunt back end of it into the center of the bot's stainless steel chest.  Teetering at the edge, Howard's center of grav went past the point of no return and he began to fall away.  He clutched to the spear hoping to pull himself back, but the Marro beast let go of it, leaving the Deathwalker 9000 (queue slow-motion) to fall gracefully away from the hill, spear in hand, down into the saltwater marsh below.  His great weight drove him deep into the water, and as it penetrated his armor (something no weapon had been able to do) his circuits shorted and his power drained.  Tor Kul Na watched from the hilltop and could hear a polite woman's voice say, "power very low" in a slow, predictable repeat.  After a dozen cycles, "find charging station now" was the last thing to be heard from the great machine, save the sound of small bubbles still working themselves out of the internal structures of his architecture.

The huge Marro beast walked to the far edge of the hill, looked down upon the Men in Black, mortal enemies mind you, and uttered these words:

The leader of the MiB replied, "We're done here," and each turned and went their separate ways.