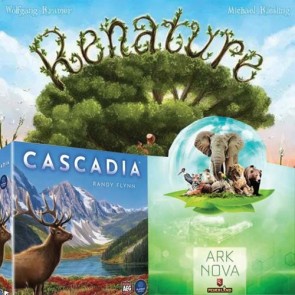 Playing board games is back! This hobby is picked up by many people, especially during holiday periods. After all, there is more time to sit together at the table.

In general, animal themed board games are most liked. Do you not immediately know what game would suit you? We are happy to give you a short update about the animal games that are currently hot.

Of course every game has its target audience. So it is best to choose a game based on who your fellow players are. Below you will find recommendations per target group. Hopefully you will discover new gems that will give you a lot of fun playing!

ANIMAL UPON ANIMAL is an animal game to play with children from 4 years old. In this game of skill you stack wooden animals with different forms on a pyramid. Try to avoid the pile from falling over. Whoever places all his animals first, wins the game.

WHO DID IT? is a reaction game in which fun is assured! There is a turd in the middle of the table. Each player is holding a set of animals that they want to prove their innocence. One player starts with saying “It wasn't my cat, it was...” Then he names another animal, for example “a parrot”. The other players who have a parrot in their hand react quickly by laying their parrot card on the pile. At the same moment they say that it wasn't their parrot, but it was...

Who did it? is a card game for families with children aged 6 or older as well as groups of adults who like to have fun. The game is suitable for 3 to 6 players.

HORSE ACADEMY is a challenging game for horse lovers who like to challenge their brain and have no one to play with.

The Horse Academy game contains a game board, a horse with rider, a gate (= exit), 10 puzzle pieces with obstacles and a booklet with 80 assignments. Every assignment shows the order of the obstacles over which the rider has to jump with his horse. The player has to search for the right place of each obstacle. There is only one solution for each assignment. The further a player progresses, the more difficult the assignments become.

In the family game RENATURE you are going to restore a polluted valley. With the help of various animals you try to transform the valley back into the beautiful nature reserve it once was. Each turn the players place a domino stone with animals on the board. Thereafter they can plant a tree on an adjacent area. They score when they have majorities in territories.

The game rules of Renature are simple. During the game there are a lot of tactical options. The game material is a feast for the eyes. Renature is a game for 2 to 4 players.

We recommend the game HIVE especially for couples. It is a two player game in which you try to trap the opponent's honeybee.

Every player has stones with insects in its own colour (black or white). On their turn they choose one of their insects to move. Each insect has it own movement options. So you get a similar thinking exercise as in chess. But in Hive there is no fixed game board. This makes every Hive game different.

Another game that is really original for two players is Pachakuna. The theme of the game is llamas.

During a game of PACHAKUNA you will trade. You carry dyes and white wool on the back of your llamas. You try to deliver these resources to places where there is a high demand for them. As a reward you get colored yarn. The first player to collect 7 different colors wins the game!

In the tile laying game CASCADIA players create a varied natural area that is habitable for grizzly bears, wapitis, chinook salmon, buzzards and red foxes. You can play this game up to 4 players.

The player whose turn it is chooses a tile and an animal from the offer. Then he places the tile in his personal nature reserve. He can place the animal tile on top of a tile that allows this animal type.

The aim of the game is to put everything together thoughtfully. The players score points by having the largest landscape in a tile type (meadow, water, wood, desert, mountains). Furthermore, they earn bonus points by placing the animals according to a certain pattern.

Game tip for Cascadia: Keep a close eye on your opponents! Prevent them from surpassing your landscape.

ARK NOVA is the best-rated game from Spiel 2021. It is a deserved winner! In the game you build a zoo with animal enclosures and you support projects to protect nature. You have to think and plan carefully and make use of the unique advantages of buildings.

Ark Nova is a heavy strategy game for experienced players. A target age is 14+. The game turns run smoothly and there is always a range of possibilities. The main game mechanics of the game are: card drafting, end game bonuses and hand management.

You can play the game Ark Nova up to 4 players. A nice touch is that the game also contains special rules for playing it solo.

Hopefully you found inspiration in the tips above? If you are looking for an online shop where you can find your favorite games, be sure to check out the Lotana board games website. You have a lot of choice (more than 5.000 board games in stock) and fast deliveries.