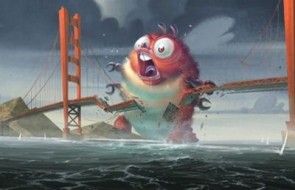 I got to see this for free because when we went to see Batman this summer, there was a freaking black dot on the screen.

So I got up and found a manager and said, "There's a freakin' black dot on the screen."

And she said, "Yeah. People complained about that during the last showing."

And I said, "Well, can you do something about it."

And she said she would.

So after the movie we found another manager, and said, "Hey, what the hell! We just paid an extra 4 bucks each to see the enhanced IMAX Batman, and there's this freaking black dot on the screen for the entire freaking movie, and it drove me freaking insane."

So the manage gave us free movie passes so that we would shut the freak up.

So when other people remember the Batman movie they remember Joker, but I just remember that freaking black dot.

Anyway, I wanted to see Watchmen, but it runs like three hours or something like that, so I couldn't send the Spawn into the kiddie flick  while we went to Watchman, so we compromised and saw Monsters vs Aliens.

First of all, the lead chick, Susan the 50 foot woman, had enormous eyes. Not just oversized to look cute. But seriously disturbingly large eyes. Her hips were kind of too big as well. It was like they originally drew her to be cartoon curvey, but then someone said, "Hey, this is a kid's flick!" So they took her down a couple cups, but forgot to make her butt smaller as well. So her eyes and her butt were kind of distracting, but not as distracting as having a freaking black dot on the screen.

I embarrassed the Spawn by laughing at all the "wrong" times during the movie, just like my Dad used to do when I was a kid.  Monsters vs Aliens is stuffed to the gills with references to great old monster and alien movies. I guess the Man and I were the only people in the theatre that had ever watched any of those great old movies. We were the only one's laughing at the "wrong" times.

Other than that, the story was pretty standard. There were jet packs, a battle with a giant robot, army dudes and tanks and space ships. Also enough snot humor to keep the kiddies amused. The monsters kind of reminded me of the F:AT staff. I also embarrassed the Spawn by knowing all the words to the "stupid" song that played during the ending credits aka Planet Claire. I made her stay and listen to the whole song as part of her cultural education. On the way home I threatened to make her watch culturally educational  movies such as Mothra vs. Godzilla and Close Encounters of the Third Kind. She threatened nightmares.

Overall, Monsters vs. Aliens was way better than Cloverfield.