Last night I got to play a lot of the swag brought back from the gathering.  A bunch of the guys in my game group go every year and always bring back interesting stuff.

Probably the best thing in the stack this year was Planet Steam, a complex economic euro which is sort of like Power Grid on steroids, with more brain burning.   I will probably write up a review of some sort soon.  I liked the game, so I'm not going to write about it in detail in the hot steamy turd article.

Unfortunately, most of the other stuff brought back from the gathering sucked harder than a one legged man in an ass kicking contest.

First, we played a Castle for All Seasons, which made me want to plop down in the middle of game night and set myself on fire like a buddhist monk.  This game combines role selection, worker placement, minimal interaction, a tacked on medieval castle building theme, and a strong paper rock scissors feel with secret role selection that relies on what the other players select for functionality.  It is like Eggert Spiele found games I rated a 4 or less on BGG, and combined them into one game, like some kind of shitty game voltron or something.  Boredom powers combine!  I would rather castrate myself with sulfuric acid than play this again.  It makes Pillars of the Earth look like a rollicking good time, and that is NOT exaggeration!  Has Eggert Spiele ever made a good game?  I have found that seeing Eggert Spiele involved automatically means that the game is going to be horrible. 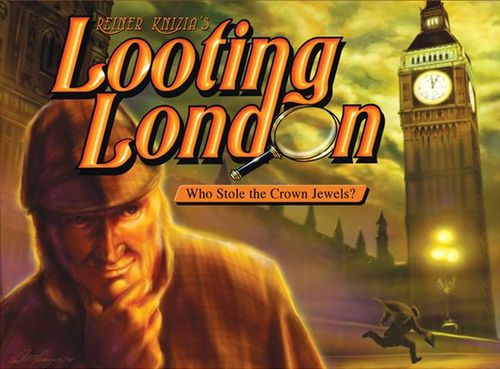 After that, we played Looting London.  This is the new Gryphon Games / FRED / Knizia design.  Someone at our table accurately described it as "ticket to ride without the trains and map" which basically sums up the gameplay.  You collect cards or four types.    The four different cards are little boy, organ grinder, cop, and lady.  You need sets of them to get VP tiles.  The tiles are evidence about who stole which of london's treasures.  You also get bonuses for most of certain colors of tiles and you can use two of any card as a wild.  It really does take the boring set collection of ticket to ride and dumb it down into an even easier game.  Not particularly original or fun.  Half an hour of my life I will never, ever get back.  The next time someone refers to Knizia as "the good doctor" I am going to remind them of this piece of shit and then refer to Knizia as "the Kevorkian of fun."

We did manage to have a good time while playing Looting London by poking fun at the weird pasted on theme.  It all started with my buddy dave thinking that the organ grinder was sherlock holmes, which was bizarre because the organ grinder has a monkey on his back.   Someone else pointed out that the monkey illustration was symbolic of Holmes' cocaine addiction.  That was the most high brow joke of the night.  From there on, it was variations on jokes about organ grinding, the creepy little boy, and how easily the game could be rethemed into one about kidnapping children, women, or monkeys.  Yeah, it was late, and the game was awful, so, true to form, we degenerated into sophomoric humor.