A classic topic on gaming related websites as long as they have existed is the creepy gamer story.  With some of the extensive game store experience some of the folks on this site have, I am sure there are some hilarious tales of social ineptitude, personal hygiene failures, and all manner of gamer craziness.

I encourage everyone to regale us your tales of gamer creepiness.  There is only one rule in the creepy gamer story crypt- change the names!  The last thing we want is your stalker-rific, thinks he is a cyborg vampire, ex-dungeon master blowing up our servers on some mountain dew-fueled fantasy shadowrun. 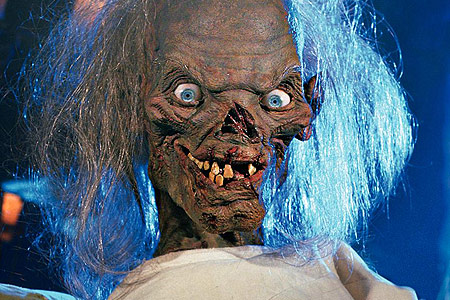 I will get this started with a classic from my high school days...  growing up I lived in a very small town called Ravenswood, and the closest game store was in Charleston (the "big city").  One day, we piled in my car and drove down there to buy books, buying a couple 2nd edition AD&D books and a sourcebook for Vampire.  When I got home, I realized the clerk had stuffed a flyer in the store for a Vampire LARP being played on the grounds of the state capitol (essentially a large public park) in Charleston.

We played table top Vampire and Werewolf once in a while, so we knew what a LARP was, but that was way too geeky for us (or so we thought.)  One of my friends had this brilliant idea that we should go down there and mess with their game.  According to the flyer, they "fed" on humans by having a conversation with them.  So what did we do?  We gathered up all the garlic and crosses we could, got flasks of holy water, and went down there with our skateboards and trenchcoats to have some fun.

Who walks up to a crowd of strangers skateboarding at night in a park and starts a conversation?  It made them pretty obvious targets.  The first one that walked up to us just smiled, laughed, and walked away when we asked her if she wanted to buy some garlic, and opened up our trenchcoat to reveal half a dozen strings of garlic bulbs.  Another "vampire" walked up to us, and one of my buddies started spouting religious nonsense about how he could sense the evil of undead, and we all whipped out crosses.  He was freaked out, surprised, but just left.  After that I guess word got around and we didn't have many more come up to us until later that night.  A slightly pudgy kid who looked to be older than us (early 20's maybe?) walked up to us later and we actually started talking to him without messing with him at first-