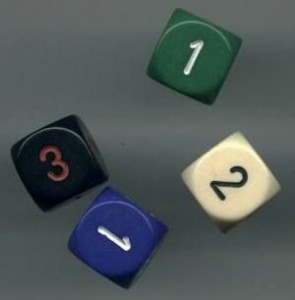 So I went over to The Grid, which is where my game group meets, to try and buy 1D3. I like to buy stuff at The Grid, since they let us play there, and are super nice, but they mostly sell CCG and D&D stuff there, so pretty much I just buy dice and card sleeves, and junk like that there. They keep all their stuff behind a counter, which is kind of a pain, but makes sense, so I had to wait for someone to help me.

Nothing against Jamie, BTW. He is an awesome guy. He also has a really cute baby, that he brings in sometimes. She just sleeps in her little car seat through all the gaming noise.  The fact that is a cool for gamer parents to bring in their babies is a testament to how socially well adjusted most of the regulars are. Not to mention how clean and and well kept the place is. Although I am tempted to take a rag and Lysol to the bathroom. The bathroom itself is clean, but the light switch and door  edges are almost black from finger prints. It's kind of gross, but it is also the kind of thing that guys don't seem to notice.

So anyway, no luck on the D3. And yes, Jamie is right, I can use a D6 and divide by 2. It's what I have been doing. The thing is that I have too many games, where you have to do this. On a 1 or 2, X happens, on a 3 or a 4 Y happens, etc. It's just that I never play any game often enough to remember these little details. So we'll start playing, and then someone will ask, "How does reinforcements work again?" or whatever. Then we have to stop and look it up.  I'm thinking that if I throw a D3 into the box, when I see it, I'll think, "What's this for?" And then I'll remember, "Oh, yeah, that's the reinforcements die."  Also, no math and fewer brain farts. Like when your supposed to get 2 dollars if you roll a 3 or a 4, but when you see the 3, you just think 3. Honestly, a D3 only costs like 30 cents. I wish game publishers would just throw one in and raise the game price by a buck. It could even be a different color than the other dice, so it looks special. But I'm an anti-demographic who notices finger prints on doors, and doesn't mind paying a bit more for convenience. Raising a game price by a buck would no doubt provoke riots and boycotts.

So I'm still hunting for my elusive D3.