I am an Assistant Game Designer 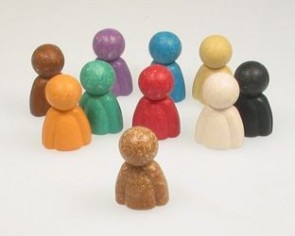 Well, sort of. The Spawn designed a board game for her summer reading project. I got to help her out on account of she decided to record an interview for her other project, and the Man has all the recording equipment. He's teaching her how to do sound editing. I just taught her how to rip off Euro mechanics and slap a theme on.

The game is Monster, the game of courtroom politics. Or something like that. It's based on the book Monster, which is a seriously messed up book to make a 10 year old read. Most of it takes place in court, so she made up a game where you collect jury pawns, by collecting sets of cards. She ripped off Ticket to Ride, for the card picking, and called it "Collecting Evidence." She ripped off Bohnanza for the card trading, and called it "Cutting a Deal." Finally ripped off Andromeda for the pawn place and pull, and called it "Convincing the Jury." I figure at least one other kid will be ripping off Trivial Pursuit, so whatever. Sucks for them, having to write up all those cards. Sucks to be that kid's mom, having to help them get all those cards written up.

The game turned out okay. This Euro game designing is pretty easy. I suggested that we add some "Take That" screwage cards (but I didn't say screwage) actually based on events and characters in the book, to add a little action to the game. But then we realized that would require actual effort, so we bagged that idea.

The beauty part of Euros is that the components are so simple. Language independance and streamlined "elegant" design means my job was easy - I got to go shopping with the Spawn to help figure out how to make the damn thing. We got three hinged picture frames, put in some sheets of colored craft foam, conviently sold in 4" x 6" sheets, called each section a "Court Room" and bingo, we had a board. A sheet of that colored craft foam for each player, and you have a player mat for scoring.  So board and player mats cost a grand total of $4 (I love the Dollar Store). A deck of Five Crowns that I picked up for a $1 at a tag sale years ago, and she had cards. The pawns were the big expense. About $25. I tried to convince her to use the old wooden RISK cubes we already had, but she saw these pawns at a WBC vendor and thought they were too cute, and had to have them. Threw in a die bag for the pawn pull, and called it done.

The Man keeps saying, "Where's the die? Isn't building a die a requirement?"