Trading in Cable for Netfix and Roku 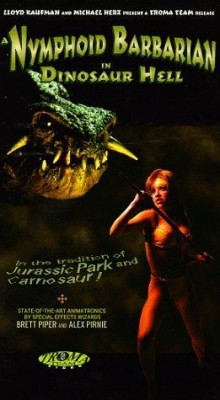 We decided to cut the cable and trade in brain dead TV and annoying commercials for the Roku and instant downloads of  Nymphoid Barbarians in Dinosaur Hell.

Now the Spawn is being all emo in her room over the loss of the Disney channel.

We just realized that aside from the Spawn's Disney addiction, we have watched almost nothing on TV for the past month. So why the heck are we paying for cable? We don't even watch shows we like on TV, because the commercials are too annoying. We just wait until the shows come out on DVD and get them from netfix. Yes, I'm still avoiding the BSG in Trash Talk, because I haven't seen the end yet.

The main objection to cutting the cord is that sometimes one of us is  just in the mood for watching some random, stupid thing. We flip through the channels and end up watching an old Friends re-run or that stupid reality show about the people with 8 kids, or maybe a cartoon or something. This is just a stupid waste of money, considering everything that can be downloaded and watched instantly, either for free or for a buck or two. We have been paying to watch people re-tile their bathroom, when we could have been watching Nymphoid Barbarians or the Golden Voyage of Sinbad for free. How dumb are we!

So we decided to cancel the cable.  I can set up my laptop to watch downloads on the TV, but it is kind of a pain, and then I can't use my laptop while people are watching the show. If I forget to reset the sleep settings, it suddenly goes black and every one moans, and I have to go mess with it. So we will probably get the Roku.

Oh, and there are still plenty of terrible Disney shows that can be watched instantly too. So once the Roku arrives, and the Spawn doesn't have to be dependent upon my surrendering my laptop to watch mind numbing crap, she may actually stop weeping and come out of her room.

Discuss this article
Log in to comment
Posts in discussion: Trading in Cable for Netfix and Roku