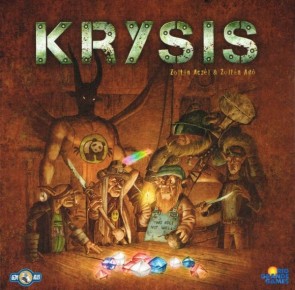 I don't even know where to start with this. It's a pick up and deliver game with bidding. They didn't just paste a theme on it. They pasted two sentences of every theme on it, and then fed the description through babble fish.

Once there was a time of luxury and extravagance. People got immensely decadent and only showed interest in war on weekdays and virtual adventures in fantasy worlds on the weekends. The gargantuan Multis became the new rulers of the world leading and manipulating the consumer society. The border between the real and the fantasy worlds started to diminish.

The economy was clearly on the wrong track and created a civilization shaky grounds, a world full of chaos and panic - the old values were all gone. After all the resources had been exhausted, magic was mortgaged and technical developments were forgotten. The people of the real and the fantasy worlds struggled to survive in caves. A new generation appeared, whose members inherited all the bad features of their ancestors.

Now there's a new fashion gaining ground: everyone collects relics from the past. People are crazy about ancient weapons, vehicles and of course, the crystals. These are the only things of value left. Nothing is more comforting than the glory of the old world. The newly found companies are competing to lay their greedy hands on these valuables.

Test your skills in the world of Krysis. You are running a company with a squad of agents. You will try to build up teams with greater initiative, combat value and loading capacity than your competitors who will be vying for crystals and relics. The prevailing maxim of these tumultuous times is emerging: 'Take everything you can!' - A grim idea if it starts to spread into other worlds