Bazooka Joe vs the Zombies 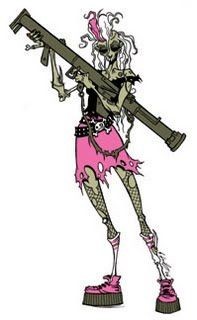 Joey Jo Jo, the Man's drummer fled the home and family to hang here and be bad. Being bad when you're married with children means showing up with a 12 pack and ordering pizza, when the wife's got you on a diet. I ordered a salad, just in case the wife called, so I could say we had salad for dinner .

Joey Jo Jo used have the job of hauling a bazooka around across his shoulders. Once he was running through the woods with that bazooka and ran between two trees that were two close together and damn near knocked himself unconscious. So Joey is the only dude I know who has actually fired a bazooka. He's also the only dude I know who has had his ass kicked by a couple of trees while holding a bazooka.

After dinner, Joey was really keen on playing Last Night on Earth, but he had forgotten his glasses at home. So he played a couple games of Blokus with the Spawn. But this was totally unsatisfying, like eating salad when you are craving a pizza.