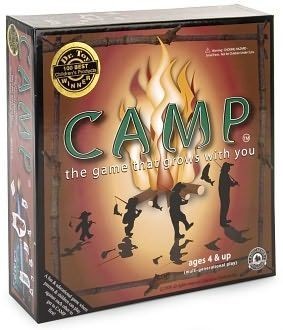 We had a couple of  hours to kill while the Spawn was at a school function, so we went to a nearby Barnes and Nobel to hang and drink over-priced coffee. I was sitting near the games, listening to people as they shopped, because I'm nosey like that, and discovered something interesting about why people buy games and how they make their choices.

First, every single person that purchased a game bought it as a birthday gift for a kid. Saturday is a big birthday party day, so Friday night is the last minute, desperate birthday shopping night. The first criteria for the gift was price, with $15-$20 being the sweet spot. The next was size. Parents vetoed some pretty good games suggested by the children in tow because they were, "too small." The game has to be a standard shape. Games in tins, bags, or oddly shaped were vetoed as too difficult to wrap. Finally, box art was a major factor. Cartoony graphics were vetoed as looking "too young." Crude art was vetoed as looking "too cheap." An award sticker on the package was a big plus. I only saw one mom actually flip a box over and read the back of a game to see what it was about.

The big seller was Camp which looks like a really boring camping trivia game. However, it was the right size, shape, price, didn't have goofy cartoons on the cover, and had a gold sticker on it.