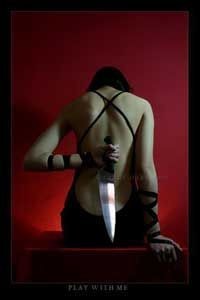 Games give me new and interesting ways to interact with other people. This is the difference between e-games and board games. While the increased sophistication of e-games seduces and immerses players into their increasingly elaborate worlds, they are all worlds inhabited by one. Even multiplayer games provide only a hint of the human interaction that occurs when people can meet each other's eye over a table and read each others facial expressions, tone of voice and body language.

Games strip away the existing social structures and constraints and create new power structures and encourage people to play with each other. Children become overlords. Lovers lie to each other. Strangers become allies. Wallflowers become leaders. Sweet, soft spoken grandmothers become mob bosses who wack their own grandkids.

Gamers scratch their head and sigh at Monopoly's continued, overwhelming popularity, when so many improvements in game mechanics have been introduced. They are missing the attraction. Hoary old Monopoly allows children to dictate terms to their older siblings, and parents. For decades there were few games that were simple enough for an 8 year old to play, that could led to that moment of decision when you hold the fate of your bullying older sibling in your hands. Do you accept their lame property and a "Get out of Jail Free" card in lieu of the cash rent they owe you, or to you bankrupt them and eliminate them from the game. HA!HA!HA!

Although new games may often rehash old mechanics, these mechanics are being leveraged with greater frequency to introduce new ways of interacting with friends, family and strangers.

Talisman and Arkham Horror may both use the old move and pick a card mechanic, but the interaction between the players is totally different. Android may have mechanical flaws, but it triggers intense, emotional interactions between the players. Battlestar Galactica and Shadow Hunters give us the permission to lie. VOC is a game of trust.  Even Castle Panic changes the normal pecking order of the family.

If you think board games have stalled out and reached their limitations, you are exploring the wrong boundary line.