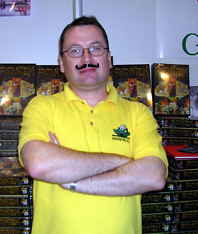 After targeting the world's most popular board game website with unjustified and inane legal charges, Gamez Werkshop is after the head of the world's most popular board game designer Marting Wallas. Board game collectors are in agony. Famous online auction site ejay is already flooded with GW's recent release "Mace Bulk". We counted about thirty auctions with an average starting bid of $200, double the MSRP. Contacting one of the sellers, we asked about the price and he replied that $200 was in fact a bargain price after enraged fans burned all copies in possession of public libraries and removed their anti-shill ratings for the game out of protest, sky-rocketing "Mace Bulk" to rank #1 overtaking the very popular simulation of watching a soft drink evaporate - "Agripepsi".

GW's demands this time are even far more unreasonable. The publisher of "All That Is Evil" is reclaiming an advance payment of $1000 they have made for one of Marting Wallas' unfinished board game creations. According to Marting Wallas and chief witness, his wife, their dog has eaten the contract. Internet lawyers are in accordance that this renders the contract invalid.

Out of loving sympathy and compassion for Wallas, a committee of board game collectors has already drafted a protest plan. Donations are collected to purchase flight tickets for the committee's most Analysis Paralysis prone members codenamed the workers. The plan is to place in every GW store one worker carrying illegally printed-out army codices for GW's most fiddly game "Yourgrammar 50X" and tasked to build the most efficient army with a limited supply of $500. The committee's spreadsheet predicts that this will lead to the full occupation of every store's staff, preventing any further sales and revenue, thereby bankrupting Gamez Werkshop.

Transcript of an interview conducted at our local game group meeting:

We: Are you supporting the recent protest against GW's actions?
Gamer 1: What have they done?
We: They're suing Marting Wallas.
Gamer 1: Who?
staring at game board and shouting at his opponent
Gamer 1: Dude, you just spawned four fucking Beanstealers!

We: Gamer 2, what do you think of the protest?
Gamer 2: It's pretty exhausting.
We: Are you one of them dreaded pro-GW imbecils?
Gamer 2: No, I've spent the last two hours tagging all GW games with "nefarious".

We: Gamer 3, as one of the "workers", have you already booked your flight ticket?
Gamer 3: Hmm ... no, not yet.
We: Why not? You must be pretty excited.
Gamer 3: Well ... excited? No ...
Gamer 4: This game is so fiddly. The skill checks are completely meaningless. I want to make intricate and significant decisions every turn.
Gamer 3: scratching his beard ... I can't decide which airline to pick ...
We: That shouldn't be so hard.
Gamer 4: sweating from his anger and body mass I WANT ELEGANT MECHANICS!
Gamer 3: ... err ... they all have their merits ...
Gamer 5: Are you a fucking toaster?
Gamer 3: ... and ... disadvantages ...
We: Well, we wish you good luck.
Gamer 6: Whose turn is it?