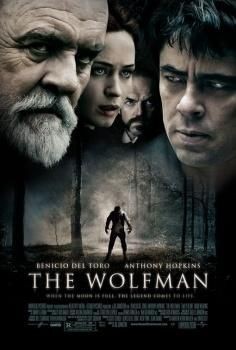 Friday night we had a rare evening sans Spawn, which meant we got to go to the movies. When you only get to go to non-family movies a few times a year, picking which one to see is an extremely serious matter. You don't want to waste the opportunity on a movie that sucks. I was therefore hesitant to suggest we see The Wolfman, as it has received mostly crappy reviews. However, with some prodding and teasing, I finally confessed that I wanted to see it, despite the reviews, and was willing to suffer the endless taunting if it turned out to be awful, like that sucky movie I picked out a few summers back where the bird flew into the windshield, but we can't remember anything else about it.

Happily, I made the right choice. I adored this movie. Maybe I just have really terrible taste in movies. I certainly can't argue with the reviewers: it is slow, it is not scary, there is really nothing much new in it, the CGI is imperfect. But it is beautiful and tragic.

And it is oh so beautiful. Colin Covert wrote: "A lavish coffee table book of a horror film, “The Wolfman” features visuals so beautifully planned and executed that each frame begs to be savored." That it is.

So fortunately I won't have live with endless teasing for picking another "bird hits the windshield" movie. I have asked for a copy of the DVD when it comes out. Considering how poorly this movie has been received, I shouldn't have to wait too long.