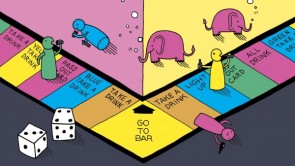 Got to ConnCon an hour later than I wanted to on Friday night. The first person I saw when I walked in the lobby was Megafauna Dan. Had a drink with him and shoveled some chicken wings and celery into my face. I was so damn hungry. We should have stopped on the way down to eat, but didn't have time. Was so totally relieved to finally be there and have food and a drink, that I relaxed a bit too much and forgot I had to register and stuff. Didn't get downstairs to do that until almost 7pm. Poor Mark. I think I caused him a bit of worry as I was scheduled to teach Tales of the Arabian Nights at 7pm.

Tales didn't go off too well. One of the kids was really too young to be playing, but I was told he played Memoir '44 with his dad. Note to self: "My young child plays Memoir '44 (or insert any other complex game in here)" = I let him toss the dice. Anyway, the kid engaged in perfectly age appropriate behavior, so we collectively decided to ditch Tales and play some games that didn't require reading or sitting in a chair for longer than 15 minutes. Did some Pitch Car  and a few others. Walk to the snack bar and drink root beer was particularly popular.

While I was running the kid's games, the Man played VOC without me. Boo! Well, at least he taught it to a member of our game club, so maybe I'll get to play it again soon. Once you have enough people in a group who know the rules to a game, it's a lot easier to get it played.

Played Betrayal at House on the Hill after the kids went off to bed. Got that lame astral spirit haunt with the really crappy rules. Every time we get that haunt, I tell myself I should make some rule notes in the manual, but then I think, there are 50 haunts, what's the chance we'll get this one again. So I don't, and it's always a pain.

Saturday was Chaos in the Old World, taught by our own Matt Loter. It was awesome, and pretty much the highlight of the con for the Man and I.

Ad Astra or whatever it's called played sometime after midnight. Boo! Part way through the rules, Dan asked, "So, you haven't mentioned space battles yet, so I'm guessing there aren't any." Then he excused himself and went to play some massive miniature battle game with like 300 minis, which looked really cool.

Sunday we tried a bunch of crap. Then played some Last Night on Earth with Grave Weapons and the Exploration variant. Pretty fun.

They pulled the Spawn's number when they were giving out the door prizes. She went up and picked out a little fairy figurine. Ever hear a group of 40 middle aged dudes go "Awww!" at the same time. I'm not sure if they thought it was really cute, or were sighing with relief that she didn't pick one of the "good" prizes. One of the guys, I can't remember who it was, came up as we were leaving and gave her 3 more fairies so she could have a matching set. Yeah, the dudes that run Conn Con are total sweethearts. Thanks to all of them.