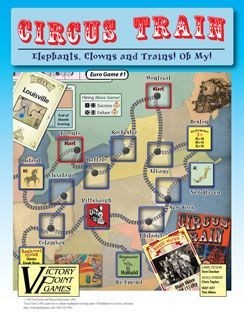 So far I have only convinced Francie Pants and a few other people to play the Basic game with us. After the first time we played, it was Francie who announced that the game gave her a headache, which is a first for our group. But not a headache in a bad way. A headache in the "this game takes some mental effort to learn and play" way. But it may just have been allergies. She now insists that she must play the Basic game several times before she can entertain the notion of learning the Advanced game. *sigh*

For 10 years I've been looking, and then, just a few weeks ago I stumbled upon Circus Train. I wasn't even shopping for games. I was just going through the piles of crap I go through to find the stuff that gets published in the F:AT news section.  I see this one announcement for the Circus Train Expansion. My first thought was that it was odd for a children's game to have an expansion. Then I noticed it was published by Victory Point Games, which made me really curious. Was there some obscure Battle of Circus? So I went and checked it out.

Circus Train is neither a children's game nor a war game. It's a pick up and deliver game inspired by Sara Gruen's novel Water for Elephants. The game is subtitled Euro Game #1. One of the guys I was playing with caught site of the rule book mid-game and commented, "This is no Euro game." To which another member of my game club, who had wandered over to observe the game, his curiosity  piqued by our cries of "Freak Show" and to mock me a bit over my pronunciation of "Acrobat" (yes I know I sound like Janine from Ghost Busters), commented, "It's published by a bunch of war gamers. To them, anything that has fewer than 300 chits is a Euro."

So what kind of game is it? It's kind of like Merchant of Venus - a fast, furious, super competitive Merchant of Venus, played on a tiny board, with players constantly on top of one another vying for performances, performers and luring each other's talent away.

Circus Train is set in the Eastern United States and Canada during the prohibition era. Players are circus owners trying to scratch out a profit while attempting to establish a World Famous Circus of Great Renown.  Every rule has a thematic  reason d'etre. The circus season is April - October, therefore the game is played over 6 months (rounds) with each month having 4 or 5 weeks (player turns). The month of April is scored differently then the rest of the season, because April was pre-view month. If you can't pay your performers wages, you abandon them in some far flung city, by pushing them off the back of a departing train, with no means of returning home (a real risk for touring performers of the era). You steal talent from other players circuses. If you time it right, you can steal performance right out from under another circus. Circus owners in the 1930's were pretty sleazy bastards, and this game forces you to embrace your inner sleaziness, no matter how much your opponents whine and beg. There's no rules regarding negotiation and trading among players, but the fact that players instinctively went there in moments of desperation, attempting to resort to the human trafficing of clowns, speaks to the kind of game it is.

The game is volatile and has some randomness in the form of the chit draw and die roll to hire/steal performers. It's the kind of game that if you play poorly you won't win, but it is possible to play well and lose.

It's got a lot of fiddley stuff that's easy to forget to do, which screws up the game. You have to track weeks and months. At the end of every week, chits need to be drawn and placed on the map. It has some mathy bookkeeping stuff.  At the end of every month player's scores need to be tallied. After every performance, the performance score needs to be calculated, which entails adding up a long string of small numbers. Performers wages need to be calculated and paid. It's a Victory Point Game, which means for $50 (base game, expansion - and you really have to get the expansion - plus shipping)  you get an envelope with a small paper map, a shit load of chits you have to punch out very, very carefully, and a bunch of cards so thin that you will have to immediately purchase sleeves for them (FFG yellow label) just to make the game playable. I also immediately replaced the player "pawn" chits with trains from Railroad Tycoon (the colors are the same and we never use all of them), and replaced the chits used to keep score with some extra pawns I had, so we didn't have to deal with trying to pick up and move those little chits, which would have been a real pain for my friends with fat man fingers. I also threw in some money tokens from another lame game we never play. Tracking money with a chit on the chart they provide would have been a pain and a half. There's a learning curve and you need to be familiar with the flow of the game. You move and take actions with a deck of 6 - 8 cards (depending upon if you are playing two-player, multiplayer, basic or advanced).  You can't reuse a card until you have played all of your cards. These cards make use of very specific language such as "must" vs "may," "and" vs "or." To make good decisions at the beginning of the game, you need to be aware of how the game plays out during the middle and end.   The first time you play, you will screw up. You will make bad choices during the beginning of the game. You will confuse what your action cards allow you to do. You will end up with only the last two or three action cards from your deck in your hand, that are totally useless and you will be able to do nothing for a turn or two until you can reclaim all your cards. You will waste turns to hire more performers than you can pay, and then lose them before you can use them. You will confuse the end of the month scoring with the end of the game scoring. You will cuss, and bitch and moan, and maybe beg and plead a bit.

But none of these "issues" turned out to be real "issues." Once you get into the swing of it, the upkeep and scoring goes quickly. The math isn't that hard, and it's not number crunching, squeeze out one extra victory point bullshit. Once everyone understands the scoring, everyone can mostly just do it in their head and keep their own scores. Unless you don't trust them or they or prone to mistakes. I always ask someone to check my math to keep me honest. Not because I'm a cheater or anything, I just make mistakes.

Francis Pants, who is the biggest bits whore I know, initially turned up her nose when she saw the game components. Another player asked if it was a print and play. But by the end of the game, everyone had to admit that the bits were both functional and visually pleasing. The illustrations are evocative of the theme and the period. The colors have the patina of a vintage circus  poster. The icons are, well iconic, and easily recognizable, while still being whimsical. Even the fonts are well chosen, a combination of simple, clear fonts for the important game play related text on the chits and cards, with the fancy font with that circus flair being reserved for titles. In fact, the careful use of fonts type, size and spacing, makes even the chits with nothing but text and numbers on them easily identifiable.

Most importantly, at the end of the games, no one was annoyed or frustrated. Instead they wanted to play again, because they "got it" and weren't going to make the same mistakes again. But the next time we played, and the next time, and the next time after that, the chits fell differently, and people made different choices, and the whole game played out in different way, and people still made mistakes, and they still wanted to try again. After our last game one guy whipped out his iphone and ordered the game on the spot. And all this was just from playing the Basic game. As I said, I'm still trying to convince people to move on to the Advanced game.