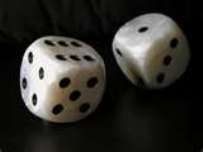 I played the new Settlers Trails to Rails game with a friend last night. It's her game. She likes it, but was getting a little frustrated with it, because every one else was getting lots of resources, but her numbers just wouldn't come up. After talking with her, I realized that she really just doesn't get probability at all. She can add together long strings of numbers in her head, which makes her a wiz at a lot of Euros, and our designated score keeper for any games that require it. But probability is just a black box to her. She also just can't trust on my word that it's more likely that a 6 or 8 will be rolled than a 2 or a 12. She needs to understand how it works to believe it. I think I have to sit down with her with a pair of dice and list of all the possible outcomes. Maybe then she can wrap her head around it.

I'm the opposite. I hate adding long strings of numbers, and usually make mistakes when I do. But probabilities are just intuitive.