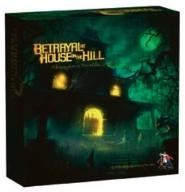 Yep, it's Halloween and there will never be a better time to review the just-released 2nd edition of BETRAYAL AT THE HOUSE ON THE HILL. I'm also looking at QUANTUM THEORY, a PS3/360 game that I doubt any of you will ever play.

It's funny, because when BETRAYAL was making the rounds five years ago, I liked it but I wasn't crazy about it. I gave it a noncomittal 7 in Games International (which the editor bumped up to an 8) and I sold my copy as soon as they broke the hundred dollar threshold on the aftermarket. I figured I was done with it.

But the reprint has sort of drawn me back into the game, and I think it's one that deserves to stick around.  I played a couple of games and I was kind of surprised at how well it's held up and how it almost works better in 2010 than it did in 2005, maybe because we've gone through the whole Prog Rock phase of AT now and this takes it back to the simpler roots. It does some things that other horror games simply do not, and I love that it has fifty different horror stories to tell you. The traitor gimmick is fun and it totally works to create a sense of drama and impending doom, and the mechanics are a lot like RAVENLOFT in that they're extremely simple and anyone can pick it up and play.  I think this game could be a mass market hit, if it could find its way into the right hands.

One thing I really like in the new edition is there's a callout that says something to the effect of "What if there isn't a rule in this book that covers a situation?" and it says, basically, "make it up on your own!"

Discuss this article
Log in to comment
Posts in discussion: BETRAYAL 2nd Edition and QUANTUM THEORY in Review