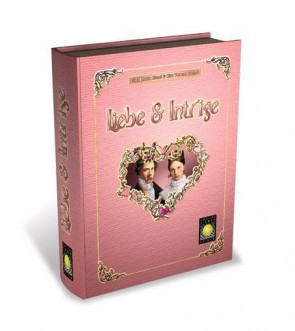 Liebe & Intrige is finally in print and is in stock in the US at Funagain Games. I put in my order as soon as I got their email that it had come in. I love online retailers that have that feature. Just click the little button next to your heart's desire, and as soon as they get it, you get that happy email.

I saw a picture of this box and instantly knew I had to have this game. It sounds silly, but I bought Merchent of Venus and Ultra Marines for the same reason and have no regrets.

T hen I read the English translation of the rules. Al and I were laughing out loud as I read them. You level up your daughters and try to get them to hook up with guys. Of course, to hook up they have to go places where guys hang out, such as bars. Unfortunately, hanging in places where there are lots of men is risky, as it can damage your daughter's reputation, and then no man will want to marry her. When she hangs out at the Tavern, she has the opportunity to meet lots of guys, but she might also get drunk, which lowers her education stats. She could get picked up by Casanova, which lowers her virture stat. If your daughter hangs at a place where there are other players' daughters she can totally be a mean girl and steal their boyfriends, or they may steal her boyfriend. The bit that had us really going was that you can infect other players' daughters with smallpox, which reduces their beauty stat. I think this game is going to be a hoot.

I hope it arrives today or tomorrow so we can play it this weekend.