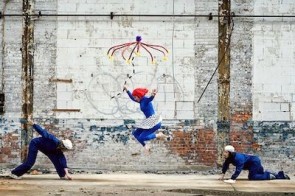 It should probably more correctly be called gamer-dar: the ability to recognize a fellow gamer. But what do you call that awkward moment when gamers hesitate a moment while trying to decide exactly how much gamer cred  this stranger to whom they are talking has, and just how much they should say?

Tonight we were playing Pompeii in a hotel lounge just outside of Boston - me, my dad, the Man and the Spawn. A guy who looked like he was maybe a college student or there abouts spotted us, came over and asked what we were playing. Typically I would chalk a question like this up to mere curiosity and just tell the person the title of the game, but how many guys in their early 20s approach a family, which obviously includes a grandpa, out of mere curiosity about the colorful little bits on the table. So I decided that he was a gamer and answered him as one. Told him not only the name of the game, but also offered him the rule book and pointed out a bit of how the game played. He didn't have time to look at the rules, and said he had a lot of games (establishing his gamer cred?) but had never seen Pompeii before.

I asked him what games he liked, and there came that moment of hesitation. Was I one of those home school moms who was playing some educational history game with her kid? Maybe the only other game I knew was Scrabble? How much should he say? Should he play it safe and go with the most well known game he had? Or take the plunge and mention something less familiar? There was a little stutter as he started to say Settlers, then changed his mind and said Dominion.

I smiled and nodded and picked up the box lid to show it to him pointing out it was a Mayfair game. He commented that it was the same company that made Settlers, and mentioned that he also liked Ticket to Ride. I told him that if he liked those, he'd probably enjoy Pompeii. He had to go, but said he'd look for it.

It is too easy to bore a non- gamer with game talk. To easy to talk over the head of a casual gamer. Too easy to sound patronizing to another gamer. Balancing on that thin edge while trying to make polite conversation with a stranger and determine what to say and what not to say about our hobby makes for a strange and cautious  little dance.