Barnestorming #5- LotR LCG in Review, sharp dressed men, and 20 eyes in my head 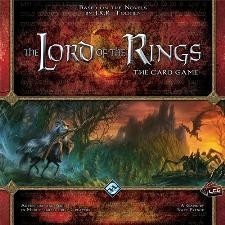 Harold Camping has revised his end-of-the-world date. It's now Barnestorming #5.

This week in Cracked LCD I’m reviewing FFG’s new Lord of the Rings card game. It’s very good, probably good enough for me to hang around for a couple of expansions to see how it develops. It’s got some quite good gameplay, it’s just a damn shame that once again FFG has done a couple of objectionable things with it. There’s no excuse for there not to be more scenarios and two extra threat dials in the box- particularly when the game is completely playable by four even though there’s an outright lie claiming that you’ve got to have two base sets to support that many. Here’s a hint- use a pen and paper or dice instead of the dials. You’ll save $40.

AEG just sent three big boxes over- the new Thunderstone expansion, Nightfall: Martial Law which is actually a standalone game that looks like it may be a better and more refined entry point than the main game, and War of Honor. I messed around with War of Honor last night, it’s pretty neat. It’s basically Legend of the Five Rings with some streamlining and a tile-based board. The gameplay is almost exactly the same as the CCG from what I can tell and you can use all of the L5R cards with it, but with some different victory conditions. Strangely, there’s a little bit of Cosmic in it- you’ve got four “provinces”, and when someone attacks, you call on allies to help you and they get rewarded with honor points for helping out. The game has four clan starter decks included and AEG threw in a bonus Mantis Clan starter as well. You can play up to ten players, it looks like. Reviews on all of this stuff soon.

I reviewed L.A. Noire for NoHS. Everything about it is great except the video game. 5/10 at best.

I’m working on a Dead or Alive: Dimensions review for Gameshark, and next week Blazblue: Continuum Shift II both for the 3DS. There may not be much available for Nintendo’s new handheld right now, but dang…fighting games galore. And pretty good ones at that.

I picked up Bayonetta again, starting from scratch on hard. It’s really difficult, but so rewarding. Still one of the best games of this console generation, it’s surprising me all over again. I laugh the whole time I’m playing it. There’s such a joy for the video games medium in it, it’s actually quite refreshing after playing L.A. Noire, which is completely contemptful toward its medium.

In case you missed it, Neuroshima Hex updated and added New York and Neojungle armies as IAPs. They’re on sale for a dollar each, regular price $2.50. Do I need to tell you what t do? No other Babel-13 material, and still no online multiplayer, unfortunately. This little game called Super Stickman Golf went free this week, and I’ll download anything for free (almost). This has turned out to be one of those near-magical IOS games that takes a really kind of dumb idea and turns it into a great game. It’s basically like a tank physics, but you’re golfing across all kinds of crazy terrain with special balls that have different effects. It’s ridiculously addictive, and apparently the multiplayer is a blast. With some more polish and “cutesy” graphics, I think this game could have been the next Angry Birds.

I also picked up a little puzzle game called The Heist. It’s not bad for a buck, four different traditional puzzle types and apparently what you’re trying to steal from the vault is a Steam code for another game. There’s a pretty surprising metagame thing it does too, that I won’t spoil.

Myst was a dollar this week too. I bought it. May as well have thrown a dollar away.

David Cronenberg is one of my favorite filmmakers. When I was trying to make movies, he and Dario Argento were the directors I ripped off the most. I love how he combines sexuality, biology, technology, and anatomy in quite philosophical and compelling ways. If you’ve ever seen the documentary “Long Live the New Flesh” (the one where Scorcese says “this guy scares me”), it’s clear that his objectives are definitely more high-minded than base shock value or meeting genre expectations.

So I caught ExisTenz on the Netflix queue last week- I’ve seen it several times, and I think it’s a highly underrated movie. It totally stands with

Videodrome, Crash, and The Fly among his best work. There are some completely NUTS ideas in it- a gun made of fish parts that fires human teeth, bio-organic game console-genitals made from mutated amphibians that you plug into your spine, a surprisingly forward-thinking device called a pinkphone…some of it is very understated, and some of it is way over the top. It fascinates me.

It’s a surreal, twisting, and hugely ambiguous movie with narrative layers not unlike Inception, but it’s far less mainstream and much more disturbing. I remember when it was in theaters, the tagline was something like “makes The Matrix look like child’s play”, which created some unrealistic expectations. This is the darker, more serious, and more compelling movie, much more influenced by Philip K. Dick than anime or Hong Kong movies.

The guy that’s remodeling our basement is about ten years younger than me, but it turns out we like an awful lot of the same music. One day I was walking by his truck and I noticed that he had a Cockney Rejects CD on the seat. So it turned out that the guy was all into street punk, Oi!, American hardcore, and all sorts of good music. He also turned out to be a huge Misfits fan. Last week while he was working he was playing “Walk Among Us”, which very nearly brought a tear to my eye.

See, “Walk Among Us” may be the most important record of my life. When I was a kid into skateboarding and heavy metal in the mid- to late 1980s, I got a lot of my music knowledge from Thrasher magazine. I’d see stuff in there about Black Flag, Bad Religion, Husker Du, and all but it all seemed kind of remote at the time because I wasn’t old enough to be angry at Reagan or suburban California just yet. But when I saw The Misfits, I knew that was my band. They sang about horror movies and looked like horror movie characters. I could relate to vampires, zombies, martians, and so forth. So I skated up to a Turtle’s Records and bought a cassette tape of “Walk Among Us”. It’s really what got me to into punk rock.

It blew me away then, and it still blows me away now. It’s not even 30 minutes long, but it has some of the absolute best American punk rock ever recorded. It’s amazingly hooky- you remember every song the first time you hear them, and every song on it is perfect in my eyes. It’s also the best production job the Misfits ever turned out. It’s definitely one of my Records I Would Take a Human Life to Defend.

Still, some of my favorite memories from high school were driving around in my ’85 Nissan Pulsar with six friends piled in (not advised), all singing “Astro Zombies”, “20 Eyes”, “Skulls”….truly good times.

Next week, I’ll do the Junta: Viva El Presidente review.

Discuss this article
Log in to comment
Posts in discussion: Barnestorming #5- LotR LCG in Review, sharp dressed men, and 20 eyes in my head