Found in a thrift store copy of Laser Attack- Barnestorming #8.

This week at Gameshark.com I’m reviewing the Horned Rat. It’s one of the best expansions released in years, a significant and seamless revision of an already great game. I think that with the fifth player added and the Morrslieb cards, Chaos goes from being the best game of 2009 to being one of the best games of the decade. Brilliant work.

Last night’s gaming event at Swamp Castle was one of the more fun times I’ve had gaming in a while. And I barely gamed at all. My good friend, the Suspiria-hating Billy Motion showed up along with Steve Avery. When I got there, the guys- along with this guy called Aaron, whom I swear I’ve met like five times- were playing one of Branham’s “we’ll see this on the table once” games, some kind of weird, nonsensical business about the Bermuda Triangle with Settlers resource trading. It made utterly no sense, and it came, apparently, in a Kingsburg box with a sticker stuck on it. Frank handed me a gallon or so of some shockingly good Swamp Castle cider and I just shot the shit until it ended.

Steve, for some reason, had a boutonniere. When he stuck it into the button hole of his American Eagle polo, it transformed him magically into a southern gentleman. It was amazing. He was asking for mint juleps and saying "I declare" a lot. This was also the first time Steve and I have been in the same room in like a year and a half. And it was too much for the cosmos to handle, because the power blew, mercifully right as we started playing Posthumous Z. I threw up in my mouth when it was brought out to the table. What a hideous, terrible looking game. When Zombie Ninjas, Zombie Nazis, and Zombie Midgets hit the table, I seriously thought about pretending like the cider knocked me unconscious so that I could hide under the table. There's a reason I don't play Steve Jackson games, and it's present in this one too. But when the lights went out, we 86ed that turd and Frank brought out this amazing game where one player pushes a tea candle around all of these wooden trees while the other players (gnomes) try to run between connected shadows to avoid being seen. It was somehow scary as fuck, ultra creepy and atmospheric. There’s probably like two copies of this game in the world. I have no idea what it was called, so I'll call it Das Candle und der Gnomens.

The power didn’t come back on, so it was still lights-out gaming. We soldiered on. Now, what happened next is one of my favorite gaming anecdotes of recent years. Frank brought out Milton Bradley’s Laser Attack, this cool game where you spin this light beam thing and you move these spaceships around to try to plant a bomb on the laser spinner. While he was taking it out of the box, Frank started spinning this tale about how you find all of this awesome random stuff in thrift store games that the weirdos who used to own the game stuck in there. Among this random stuff I saw the rulebook for The Fantasy Trip: Wizard. I thought “wow, that’s pretty crazy that was in a thrift store game”. Frank shrugged and said “who knows”.

But then, the box also produced the following:

How’s that for “random thrift store finds”? The magic trick book was especially incriminating because Frank had just told us earlier this evening about his collection of magic tricks from when he was an amateur magician. Then, Frank revealed that Laser Attack was his favorite game from when he was a kid. Thrift store my ass. Busted.

I wrote up an editorial about Nintendo over at Nohighscores.com. We’ve had some discussion about the Wii U in our forums here, I just went all op-ed on what I think about it. In sum- Nintendo is losing relevance quickly.

I’m playing Infamous 2 on the PS3. It’s pretty good. I thought the first one was fun and it’s one of the few open world games I’ve played longer than 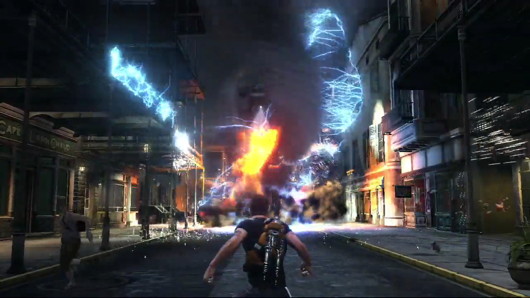 about 10 hours. I actually finished it and it had an amazing ending, leaving me wondering how they’d follow it up. Unfortunately, the writing in the sequel is atrocious. There’s a change in setting, characters are different, and there’s at least one horrible character that I almost can’t stand to hear speak.

But the gameplay is really good, and there’s even more fun lightning powers. The game does a really good job of conveying a sense of growing power and evolution, and it has that “you are a badass” feel like Arkham Asylum.

It is getting repetitive, however, and I’m tired of stopping this one cop from messing with this bomb. It’s cool that there’s ALWAYS something to do- a mugging to stop or whatever- but there’s a very small variety of these things. There’s user created missions, but so far what I’ve seen sucks.

A good rental. I’m glad I didn’t buy it.

Next week- Shadows of the Damned.

Nothing new this week…I’m still playing the crap out of Tristan Pinball, Devil’s Crush on the TG-16 box. I also picked up Ninja Spirit for the emulator, it’s a fun game that I loved when I was a kid. It’s one of those I remember every tiny detail about.

I saw mention of a new game coming out that’s a turn-based dungeon crawl but it’s strictly push multiplayer. And there’s a DM player, so I suppose it’s something like a multiplayer Descent-style game for IOS. It sounds awesome. I wish I could remember the name of it. Any clues?

We went on a road trip over the weekend and River watched Pee-Wee’s Playhouse off and on while we were heading to and from Charleston, South Carolina. He was kind of stunned by it, watching with his mouth open but utterly transfixed at the awesomeness of it all. Pee-Wee’s Playhouse is by far the greatest children’s program ever made. Period.

When we got home, I wound up watching a bunch of episodes myself. I don’t often laugh at comedy, but those shows crack me up. There is some truly brilliant writing in them, great characters, and hilariously bizarre situations.

So of course, I wound up watching Pee-Wee’s Big Adventure. I absolutely love the movie, and I think it may be up there with Blade Runner, Mad Max Beyond Thunderdome and Apocalypse Now as movies I’ve seen at least 50 times. It was made back when Tim Burton movies had heart and warmth instead of just cold, empty production design. I really wish that guy would stop what he’s doing at get back to making pictures like Pee-Wee, Edward Scissorhands, and Ed Wood. I liked Sweeny Todd, but even that lacked the heart of his best films. Most of his work is utter trash anymore, from Planet of the Apes to Big Fish to…shudder…Mars Attacks.

As promised last week, I have been watching Touch of Evil. A lot. I really should take it out of the player. Such a great, great film.

All Slayer, all the time. They came up on the Danzig station on Pandora and that spun me off into the cycle of listening to everything from the Rick 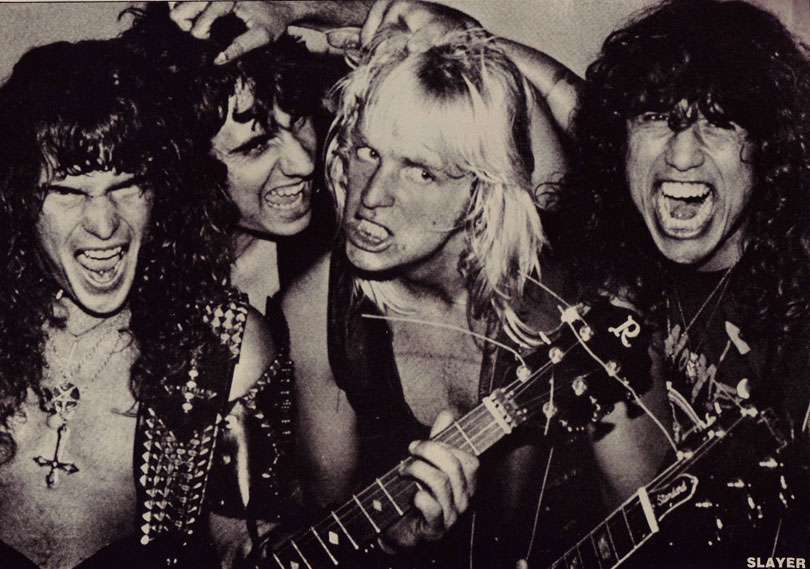 Rubin period. I like the earlier records (“Show No Mercy”, “Hell Awaits”, “Haunting the Chapel”, et. Al.) just fine but “Reign in Blood”, “South of Heaven” and “Seasons in the Abyss” is one of those sacred record trinities that just can’t be topped. Listening to Slayer now, it amazes me how so many thrash and speed metal acts from that era sound quaint now (Possessed, Flotsam and Jetsam, Metallica) but Slayer still sounds incredibly aggressive and threatening. They still retain that “maybe I shouldn’t be listening to this” aura. Man, I remember seeing guys walking around with those Slatanic Wehrmacht shirts and just being like “holy shit, that is fucking EVIL!” Is there anything like that in culture today, anymore

Part of it is the production. It’s so precise, measured, and technically proficient. Yet it’s like Rubin is restricting an ungovernable force of speed and hatred, and that creates this amazing sense of tension in the music. Then there’s this awesome juxtaposition of medieval Satanism and concepts of evil abutting against a sense of modern urbanism, warfare, and moral/social decay- just like with Black Sabbath.

I’ve listened to all kinds of metal from all over the world. I’ve heard the most extreme, aggressive, avant-garde, darkest, and most underground stuff there is. But _none_ of it makes me feel like Slayer does, and Slayer is more or less a mainstream act. They simply did it the best, and that’s why they’ve retained their stature and integrity after nearly 30 years.

Next week - Conquest of Nerath. It's good.