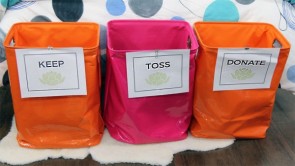 Unlike the TV show, Hoarders, I don't have an entire crew capable of clearing out my crapola in two days. Therefore, this clean-up has become more of a campaign than a one shot deal, requiring planning and logistics not unlike trying to get an RPG group together on a campaign to raid the Dragon Hoard, with the Department of Public Works as our total dick DM.

As it turns out, actually getting the crapola off our property has turned out to be more difficult than deciding to part with our "treasures." Two pages of rules governing what, when and how to dispose of stuff has resulted in one room on our third floor becoming a designated holding pen for stuff that must wait for us to obtain the proper dump permits and then wait for the appointed dumping dates for the items based upon type. Mid-July is the earliest we will be able to get rid of the three old computer monitors, and other dead electronics. The crib mattress will cost us $12 in fees to dump. Metal costs $6 a truck load and can only be brought on certain days...

The Permit Office closes at 3pm, except on Thursdays. The Dump is only open from noon to 4pm on Wed, Sat and Sun. The pick-up truck is my step-dad's so we can only use it when he isn't using it...

Despite this logistical nightmare, we were able to meet or exceed all but two of my goals for last week:

We were only able to make one dump run instead of two.

We have not come up with an entire box of books to donate.

One box of toys and games donated.

One box of household items donated. PLUS we uncovered six chairs and several other larger items to donate.

One box of clothes donated. PLUS two more large trash bags, for a total of about 100 gallons of used clothes out of the house.

Most Difficult to Deal With:

Stuff in my long abandoned studio from my days when I worked as a designer. But once I took the first step and threw out a basket of old paint, and several yards of faded fabric it got easier. I was eventually able to fill two garbage bags with stuff, and even decided to get rid of one of the old sewing machines, although we haven't decided whether to haul it to the Goodwill or try to sell it. I did, however, decide to keep my drafting table, all my drafting tools and a portable easel, despite the fact that I know I will probably never use them again. Oh, well, can't completely reform myself in a week. I remain motivated by the fact that once the room is cleared out I will be able to put it to use again for something. It is probably one of my favorite rooms in the house, being on the third floor, with fabulous light and a quintessential New England view out the window.

Found a bow (no arrows). Why the hell do we have a bow?

This is the second in a series chronicling my attempt to de-clutter my home. During the process I explore my complex relationship with objects and collections, expose my family's chronic disorganization, and try to get my shit together and the crapola out of the house.

For those of you who are just tuning in, here's the rest of the story.

Pumped for the Dump

The De-Hoarding Grinds to a Halt