Pumped for the Dump - The De-Hoarding Campaign 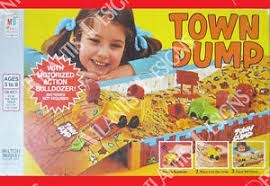 We made up for last weekend's failure to make two dump runs, by hauling FIVE  truck loads to the dump this weekend. It was hot, dirty work and and I still have a few aches and bruises today. We found out the town had changed one of their rules to our benefit - electronics can be dropped off for recycling for free. We were able to put together an entire load of old computers, monitors, printers, TVs, VCRs and DVD players. I know that sounds nuts to have been storing this stuff for years, but as I mentioned in the comments of a prior entry, you used to have to wait for a specific collection day to get rid of electronics, and we always forgot which day it was. The old dump guys are real characters. The Dump Master reminded me of a short "On Golden Pond" Henry Fonda, complete with fishing hat and fatherly advise on how to load and sort our junk. There was an almost carnival like atmosphere over at the crushable, combustible junk compactor, with one of the dump guys shouting out encouragements like "throw hard," "aim for the middle", and "good toss", as people attempted to throw their junk about 6 feet to hit the compactor opening. The dump guy over at the wood bin took notice of some of our wood, and asked us how old our house was. He mourned the rotted condition of the old beam we were tossing, and managed to salvage a bundle of wood trim  from our pile to keep for himself, explaining to me how it was originally made.

With all the big, obvious stuff out of the way, the real work began in earnest as we opened innumerable bins and boxes to find out what the heck was in them. The Spawn helped clear out nearly half the walk-in-closet of baby clothes, setting aside just a handful of baby items as keepsakes. We also cleared out nearly all my old clothes. The Spawn pulled out a few items for herself that she felt she could 'rock,' including a floor length purple cardigan, and a couple of my college T-shirts, but  took a pass on the jean jacket and the other 'ugly' clothes. Altogether I hauled three carloads to the clothes collection bin.

The attic is now at that point of 'it gets worse before it gets better,' with stuff strewn everywhere. Hopefully we can pull it all together with a couple of evenings work and then achieve our true goal - move the seasonal and infrequently used stuff out of living space and into the attic.

A box of papers probably packed around the time I graduated from college containing, among other things, cards and love letters from various guys I don't even remember. Yikes.

A band new turntable still taped up in it's box.

A box marked Joe's clothes. I was confused as to why my friend Joe would be storing a box of his clothes in our attic until I opened the box. It didn't belong to my friend Joe. It belonged to G.I. Joe.

This is the third in a series chronicling my attempt to de-clutter my home. During the process I explore my complex relationship with objects and collections, expose my family's chronic disorganization, and try to get my shit together and the crapola out of the house.

For those of you who are just tuning in, here's the rest of the story.

Pumped for the Dump

The De-Hoarding Grinds to a Halt

Discuss this article
Log in to comment
Posts in discussion: Pumped for the Dump - The De-Hoarding Campaign